Alber Saber Talks to the Press: ‘They Picked a Good Moment to Target Me’ December 20, 2012 Paul Fidalgo

Alber Saber Talks to the Press: ‘They Picked a Good Moment to Target Me’ 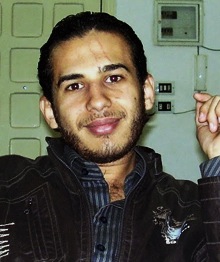 Egyptian atheist blogger and activist Alber Saber, recently convicted of blasphemy and now out on bail awaiting an appeal, gave an interview to Maggie Fick of the Associated Press.

The substance of the interview focused on the Islamization of Egypt under President Mohammed Morsi, which Saber calls “no different from the former [Mubarak] regime,” adding that only “the weapons have changed” while institutional oppression remains.

Saber also noted the political convenience of his arrest and conviction, saying, “They picked a good time to target me,” alluding to the appearance of the anger-inducing “Innocence of Muslims” Internet video.