The city buses in Saskatoon (in Saskatchewan, Canada) have a very offensive message on them. Are you ready to see it? Don’t say I didn’t warn you: 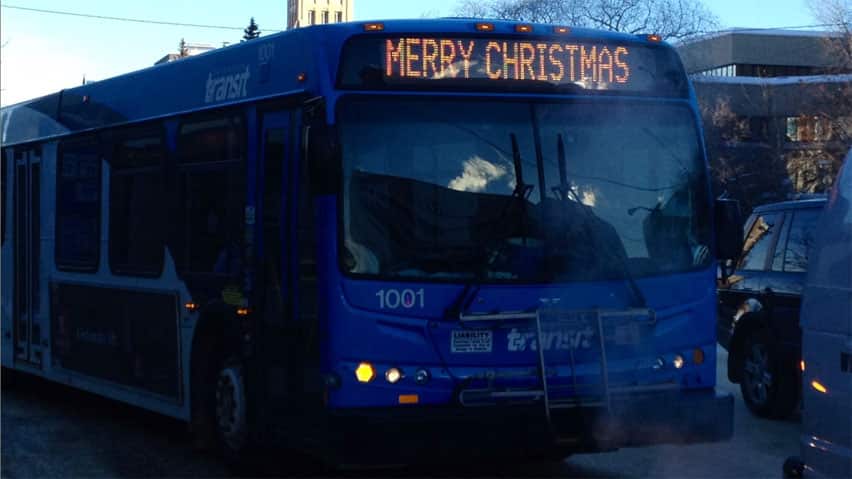 OMG, CAN YOU BELIEVE IT?!

… Solo vowed to take the matter to the Saskatchewan Human Rights Commission, claiming the Christmas greetings violate his right to be free from religion.

He said the salutation also favours Christianity over other religions, which is particularly problematic for Saskatoon’s immigrant community, many of whom rely on bus service.

“Christmas messages on Saskatoon Transit buses make them feel like they need to convert to Christianity to be first-class citizens,” he wrote in a complaint.

“Therefore, the Christmas messages on Saskatoon Transit buses are a forcible attempt at Christian indoctrination.”

… the hell? Since when does a sign reading “Merry Christmas” make any atheist feel like a second-class citizen?

We mock Christians who freak out about someone saying “Happy Holidays.” But it’s not much different when an atheist freaks out over a sign reading “Merry Christmas.”

Before you agree, though, Solo does have a point. Kind of. If this is government transportation, should they really be promoting only one religion’s holiday? Just like his last complaint, I have mixed feelings about this. I don’t think the transit leaders were intentionally trying to force Christianity upon the masses. Still, they ought to be educated about what they’re doing wrong, and Solo, while over the top, is giving them the lesson they need.

The local councillors had two options: Include additional holiday messages that are more inclusive of a diverse population — which Ward 4 Councillor Troy Davies said he was ok with — or get rid of the messages altogether since you can never include *every* holiday — which is what Solo wanted.

So what did they end up doing? The councillors voted on the former option:

Politicians in Saskatoon have decided to keep showing the message “Merry Christmas” on transit city buses, although they will also be showing additional messages of “Seasons Greetings” and “Happy Holidays”.

Solo will inevitably argue this is still a problem. But I see it as a win-win. The city expanded its transit messages and the persistent Solo came away with a victory. Sure, it’d be even better if the messages read “Happy Hanukkah” or “Happy Solstice” as well, but I’ll take “Seasons Greetings” any day.

(Thanks to Kelly for the link!)

December 19, 2012
Toxicity and Truth: On 'New Atheism' and Interfaith Activism
Next Post