Founder of Domino’s Pizza is Fighting Against Contraception Mandate

On Friday, Domino’s Pizza founder Tom Monaghan filed suit against the federal government because he does not want to cover birth control for his employees.

Monaghan, a devout Roman Catholic, believes contraception is a “gravely immoral” practice that has nothing to do with healthcare. According to reports, Monaghan currently offers health insurance plans to employees that excludes coverage for contraception and abortion.

I guess, according to his logic, birth control has as much to do with heath care as taste has to do with pizza. (Shall we call that a pizza burn?!)

At least the Papa John’s guy was just plain greedy when he didn’t want to give his employees health care access.  The Domino’s guy is going to play the religion card.

Listen, dude.  If you want to try to hold your perceived moral high ground and not have sex unless you want to have babies, that is your damn business.  I couldn’t care less about what you do in your bedroom, but consider the following:

When I was in high school, I got on birth control before I ever even held hands with a boy because I got cramps so bad that I was puking. My doctor prescribed — and please note those two words when you pretend that birth control has “nothing to do with health care” — me birth control to try to rein in my symptoms and, you know, keep me from being in agony every 28 days.

Wait… scratch that whole story.  It is none of your fucking business what your employees do or do not do in the privacy of their home. You own a company; you’re not a dictator ruling over your villagers.

Do you allow Viagra to be covered under their plan?  Because something tells me that a 65-year-old guy who needs it is not trying to knock up his wife. Where’s your freaking moral outrage against Grandpa wanting to get it up?

Nothing makes me more furious then these old men denying women the health care that they need and deserve because of their Deeply Held Religious Beliefs.

Do you know what my Deeply Held Religious Belief is?  That women deserve better. That we shouldn’t still be having this same goddamn argument. That I have never met the owner of my company, and that I would be utterly outraged if he sought to dictate my personal business.

Please, I beg of you. Enough of this. I’m tired of being angry.

I’m still working on more details of this particular story, but according too Domino’s Facebook page, Monaghan is no longer affiliated with Domino’s Pizza, as he sold the company to the infamous Bain Capital in 1998. 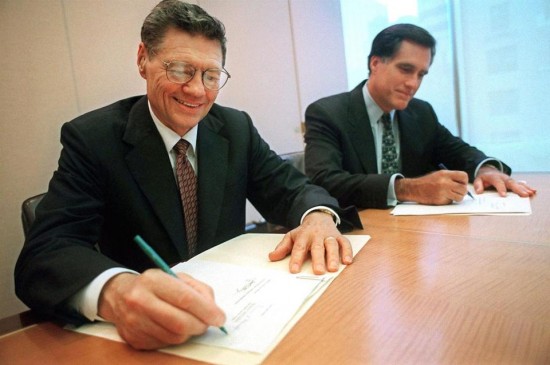 He is suing on behalf of himself and Domino’s Farms.  I apologize for the confusion, and here is the information that I found in several sources:

On Friday Tom Monaghan, the founder of Domino’s Pizza, filed suit in federal court in Michigan, challening the federal government over the contraception mandate. Domino’s Farms, a Michigan office park complex that Monaghan owns is also a named plaintiff in the suit.

I am still trying to establish who, exactly, Monaghan’s employees are who do not have birth control covered.

If anyone has helpful links, please leave them in the comments.  I apologize for any confusion, and I am looking into this as much as possible.  Unfortunately, I am at my day-job right now, so I don’t have tons of spare time, so extra information from readers is greatly appreciated.