Why Religious Explanations of the Newtown Shooting Fail

This is a guest post by Brent Brookhouse. Brent is a boxing and mixed martial arts writer living in Southwest Michigan and a longtime reader of The Friendly Atheist.

The “pray for the victims and their families” posts that fill my timelines on Facebook and Twitter in the wake of a massive tragedy always leave me somewhat baffled. I suppose it’s the idea of praying to a deity who had just allowed the tragic events to happen to ease the pain of those affected.

While that confusion isn’t unique to me, I don’t go out of my way to be offended by the idea of Christians praying to ease suffering. I understand the idea of wanting to offer some sort of help to families and a community suffering from unbelievable amounts of anguish. And, assuming you believe in a God who can help those people, I understand asking God to be there for them as there is really no other “help” you can offer (although Ericka offered a great list of things an atheist can do in these situations).

There’s another side to the Christian response, though, and it’s one that gets to the core of why a non-believer’s lack of faith is strengthened in these horrible moments.

In the days before the shooting there was one of those obnoxious self-made e-cards floating around, blaming crime on a lack of Bibles in schools. I saw this no less than four times on my Facebook feed: 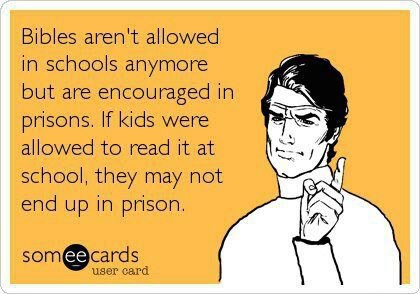 This is, of course, inaccurate on a number of levels. Bibles are not banned from schools. Similar to the Harry Potter series or Animal Farm or any other books, they can be read by students at lunch, on break, between classes, and any other time as long as it doesn’t interfere with classroom learning.

Then, there’s the fact that prison population studies certainly don’t seem to bear out anything that would lead someone to believe that a lack of good ol’ Bible-reading is what is landing people in jail. Lack of religion simply doesn’t correlate to an increase in criminal behavior — and you can’t cure mental illnesses by being reminded of the Ten Commandments.

What did the prevalence of these sorts of ideas do in the wake of the horrible tragedy in Newtown? You had extreme right-wingers coming out of the woodwork to say that God couldn’t come to the rescue of those kids because he doesn’t go “where he is not wanted.” (I’d like someone to share that information with all those evangelists who claim they’ll pray for Jesus to enter my heart.)

As a result of those kinds of comments, you have memes like the above e-card spreading online. Once you plant those seeds, it only takes a single incident for them to grow. Unfortunately, the most recent tragedy was one of the worst in American history.

The “problem of evil” (a.k.a. theodicy) has always been used to illustrate the failings of the concept of God, but to frame it in this discussion:

So trying to reconcile the idea that God was apathetic because he is “not wanted” in school, or angry because school-led prayer/Bible study is no longer allowed, doesn’t seem to line up with any sort of concept of a “loving God.” To suggest that God could have intervened to protect children but didn’t because of anger at decisions made by people those children have no concept of or control over is so disgusting, it serves to drive many atheists (or those sitting on the fence) further away from faith.

The defense Christians often give to this argument is that God couldn’t intervene because he gave man free will. But couldn’t God have allowed the shooter to enter the school with guns but jammed all of them so that he couldn’t harm anyone? Couldn’t God have saved the children through any means that didn’t involve changing the motivations of the shooter?

If the answer is “no,” then you forfeit all right to claim that this same God “protects” or “saves” lives in any other situation (like car crashes, drownings, heart attacks, etc). God either does or does not have the power to protect the innocent. And saying that “his ways are beyond your understanding” is the mother of all cop-outs.

The fact that it’s impossible to reconcile something like what happened on Friday with any God deserving of worship is why atheists are, in my opinion, able to handle these situations with more perspective. By understanding why the concept of God doesn’t work in these tragic scenarios, we aren’t stuck focusing on the “work of the Devil” or trying to take advantage of the tragedy to push an agenda of exclusionary religious politics in public institutions of learning. We can look at this as what it was: an extremely troubled young man committing horrific acts against innocent victims. We can push for a need for better access to mental health services. We can push for better gun control laws. We can look to science to try to better understand the way the human brain works. But we don’t have to waste time promoting God.

Living without God allows us to focus on pursuing realistic explanations and solutions to societal issues. That should always be the focus, not agenda-driven nonsense.