A couple of years ago, Pat Robertson said something sensible (bear with me here) about marijuana:

“There’s something else we’ve got to recognize. We’re locking up people who take a couple of puffs of marijuana, and the next thing you know, they’ve got ten years. They’ve got mandatory sentences. These judges say, they throw up their hands and say there’s nothing we can do, there’s mandatory sentences. We’ve got to take a look at what we’re considering crimes and that’s one of them. I mean, I’m not exactly for the use of drugs, don’t get me wrong, but I just believe that criminalizing marijuana, criminalizing the possession of a few ounces of pot, and that kind of thing, I mean it’s just costing us a fortune and it’s ruining young people. Young people go into prisons, they go in as youths, and they come out as hardened criminals and it’s not a good thing.”

Those comments might help explain the apparently hypocrisy of a medical marijuana dispensary in California… that is run by an evangelical Christian family: 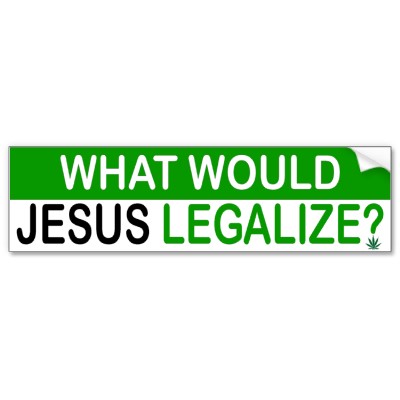 Canna Care of Sacramento, a family owned dispensary known for supplying medical marijuana and advocating for decriminalization, evangelizes and prays with its customers. Canna Care oversees group prayers in a typical day around 6:00 p.m. and has handed out an estimated 3,000 Bibles to those who come for their services.

The argument made by the Christians is that medical marijuana is all about helping people deal with pain. It’s about compassion. It’s not about getting high:

I wouldn’t be surprised, though, if many of the Christians who support this dispensary also support marijuana legalization in general. They don’t hold the extreme belief that marijuana is somehow worse than other banned substances and understand the reality of what it does and doesn’t do. If only more Christians could be that sensible about other social issues.

December 12, 2012 FOX News Host to Atheist: Your Billboard Offends Me So I'll Mock the Murder of Your Group's Founder
Browse Our Archives
What Are Your Thoughts?leave a comment