When Godless Money Hurts a Business

We’ve all seen examples of passive-aggressive atheist activism: Downvoting pro-religion posts on Reddit. Putting a warning label on hotel room Bibles. Crossing “In God We Trust” off of dollar bills. We can debate whether any of that makes a difference, but the point I want to make is that we believe these actions hurt no one. You make your point. You move on.

But a recent story out of Shreveport, Louisiana shows that our silent protests can sometimes affect people who have no dog in the fight.

It seems that an atheist went to a local business called Julie Anne’s Bakery and paid for his/her purchases with “Godless” dollars bills. A black marker had been used to cross “In God We Trust” off the back of the money.

No big deal, though. It’s still legal tender. The store owners took the money and put it right back into circulation, just as they should have.

Then someone else came to their store. When she received her change, the Godless money was inadvertently given to her… and she assumed it was the owners who had crossed off the phrase. So she went right to Facebook. (The screenshot below comes from a secondhand source): 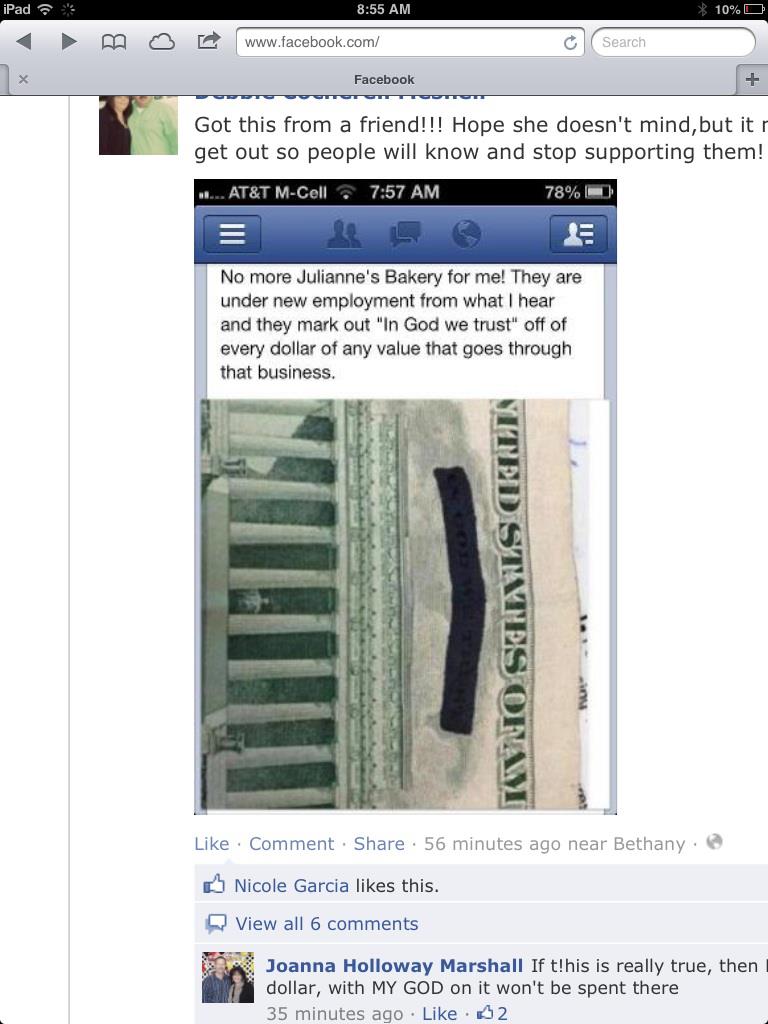 Thankfully, before the issue blew up, the store owners clarified that they had nothing to do with the markings:

We would like to take a moment to address a situation that has recently been brought to our attention, it seems that there has been an issue with some currency that some customers have received from our bakery with black marker on them. We would like to assure you that we would never mark anything out on any money, we have seen some of these bills coming through our bakery, but from a business standpoint, if they aren’t counterfeit, they are still valid currency, so if you have received any of these bills, it was only because we were given them, and then they made their way back out as change. Please feel free to bring them back here or exchange them at any bank. We sincerely apologize for any negativity that this has brought about.

The person who began the accusations quickly apologized and took down the original post.

I’m glad that worked out and the business didn’t suffer because of any anti-atheist sentiment, but it just goes to show that our actions have consequences, even when we think they won’t have that sort of impact.

Just something to think about next time you’re crossing that phrase off your money.

(via James Burns — Thanks to Randall for the link!)

December 7, 2012
Atheist Resigns from West Point Due to Anti-Atheist Discrimination and Promotion of Religion
Next Post