“The bigger government gets, the smaller God gets.” — Sen. Jim DeMint (R-SC)

Jim DeMint, heralded for a time by political pundits as the most powerful member of the U.S. Senate, shocked even his own staff yesterday when he announced that he’ll relinquish his seat next month to become president of the Heritage Foundation, the preeminent Washington, D.C. think tank for social conservatives. There are a few things worth unpacking about this development.

Media christened DeMint as the great “Tea Party Hero” in 2009-10 largely because he supported primary challengers against Senate candidates favored by the GOP establishment: Mike Lee, Christine O’Donnell, Rand Paul, and others. As Dave Weigel recounts, DeMint’s operational philosophy was to shun hands-on legislative maneuvering in the interest of exerting influence by less conventional means — working closely with conservative media to promote his vision of Small Government. DeMint proudly refers to himself as a “marketing” guy, not a guy terribly concerned about the ins-and-outs of policy-making. 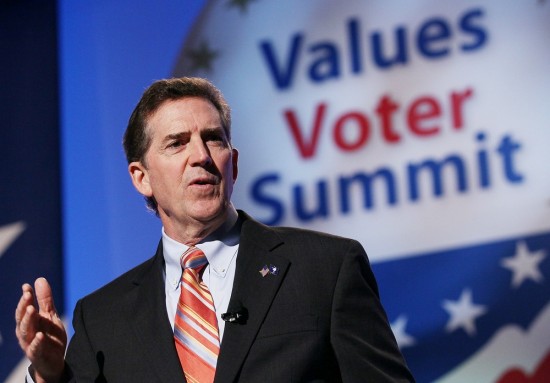 In popular media accounts, the “Tea Party” was originally portrayed as an amazing grassroots coalition of disaffected conservatives and libertarians so fed up with excessive government spending and exploding debt/deficits that they spontaneously banded together to save America from certain fiscal doom. We were told that these folks had set aside “social issues.” This narrative was always a total sham, and DeMint’s move only crystallizes it.

For one, the quote above should dispel common notions of “economic” versus “social” issues. Social conservatives like DeMint are not generally opposed to government spending on principle, because they are happy to shower the military, Law Enforcement, and other government agencies with profligate funds at a moment’s notice. What they are opposed to is social welfare programs, because in their eyes these programs foster dependence and indolence, and therefore inhibit the flourishing of a properly God-fearing society. When secular authorities provision healthcare and foodstamps, so DeMint’s thinking would go, they instill secular values into the populace. Reductions to such spending is therefore viewed as just as much a “social issue” as same-sex marriage or abortion.

In DeMint’s mind, any unwarranted encroachment of government authority into private business constitutes a subversion of Christianity. Regulations displease God, because God looks kindly on profit-generating free markets. Right-wing Christians are shrewd enough that they will often frame their arguments against government spending in terms of “fiscal responsibility,” but with perhaps a few exceptions, this is typically a ruse. Social conservatives were happy to vote for any expansion of government requested by George W. Bush, an Evangelical Christian. Their fear is not of governmental power per se, but governmental power wielded by the wrong person for ungodly purposes.

At 61, DeMint is not looking for a quiet retirement. 61 is not very old for a U.S. Senator. Rather, he stated yesterday that his goal is to exert even more political leverage than was available to him as a member of the world’s most powerful legislative body. In an interview with Wolf Blitzer, DeMint conceded that while he wields “enormous power” in his current capacity, assuming the Heritage Foundation presidency will afford him greater power. (You may have noticed that accrual of “power” is a key theme.)

“They were hoping and praying for a few members of Congress to stand with them,” DeMint wrote in a 2011 memoir, The Great American Awakening: Two Years that Changed America, Washington, and Me. “Something deeply spiritual was happening in the nation.” For him, the “Tea Party movement” was a fundamentally “spiritual” movement to change the moral character of America, not a movement principally focused on reigning in nebulous “spending.”

As president of an agenda-setting “Establishment Republican” institution, DeMint’s campaign of spiritual warfare is destined to continue.

December 7, 2012
When Godless Money Hurts a Business
Next Post