Texas: Where Even the Atheist Movement is Bigger December 6, 2012 Hemant Mehta

Texas: Where Even the Atheist Movement is Bigger

The Dallas Observer has a wonderful cover story by Anna Merlan on the rise of atheists in Texas: 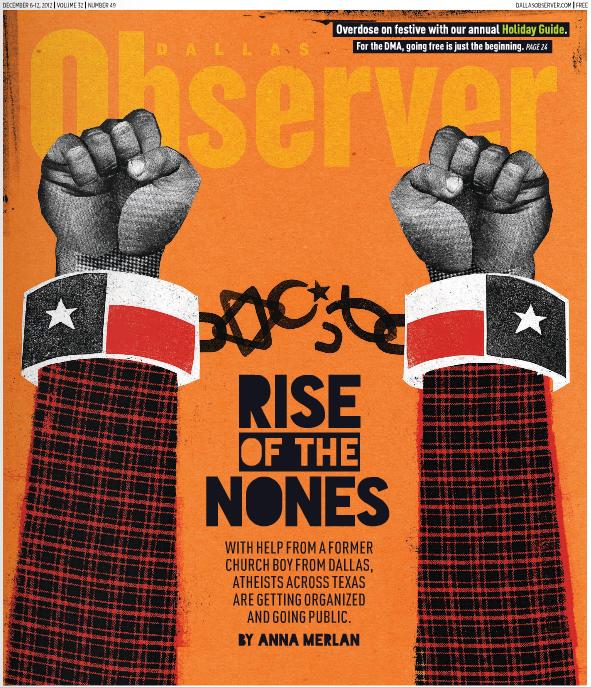 Despite these sputters of public activity, non-believers have mostly remained out of sight, both in Texas and throughout the Bible Belt. But lately, a small army of determined atheist groups throughout the state has begun working to raise the profile of the not-God-fearing any way they can: engaging in well-publicized charitable work; buying roadside billboards; launching print and television ads; and, in FOF’s case, strategizing on how to turn their following online into a larger, flesh-and-blood organization. The activity is especially concentrated in Dallas and Houston: The Houston Atheists are the single largest group in the state, with around 2,000 members, while the Dallas Fort Worth Coalition of Reason, an umbrella group for all of the DFW area’s atheist, agnostic, skeptical and freethought organizations, has an estimated 3,000 members.

Zach Moore (Fellowship of Freethought) and Aron Ra (YouTube) are featured prominently in the piece and Madalyn Murray O’Hair is profiled as well.

Overall, it’s a positive article focusing on how atheists are building communities in the area and getting their voices heard.

More of this, please.

December 6, 2012
The Least Offensive Holiday Display Ever... So I'm Sure the Christian Right Hates it
Next Post