Believe it or not, there are LGBT groups at Christian colleges. They’re underground, online, and *very* anonymous. The schools would expel the students in a heartbeat… if only they knew who they were.

You can ask why the students go to these schools in the first place, but they found a way to reconcile their homosexuality with their faith, and who are we to question the logic of religious people…? (I kid, I kid…)

And the school’s Chancellor, Michael Farris, is furious about it.

Over the weekend, Farris sent a message to Queer at Patrick Henry College: 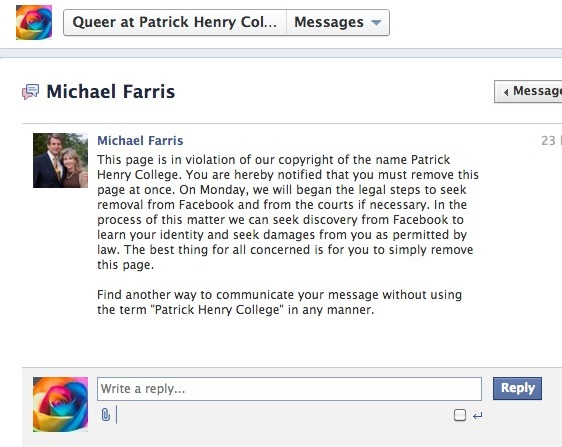 “This page is in violation of our copyright of the name Patrick Henry College. You are hereby notified that you must remove this page at once. On Monday we will began [sic] the legal steps to seek removal from Facebook and from the courts if necessary. In this process of this matter we can seek discovery from Facebook to learn your identity and seek damages from you as permitted by law. The best thing for all concerned is for you to simply remove this page.

Find another way to communicate your message without using the term ‘Patrick Henry College’ in any manner.”

The owners of the group weren’t about to back down, considering Farris didn’t have much of a case — the school’s name can’t be copyrighted (PDF) and the students aren’t doing anything wrong:

One of the bloggers also told New York Magazine:

“Despite the college’s claims that they foster open dialogue on tough issues, their first response on this has been to attempt to bully and censor us through the misapplication of copyright and trademark laws. We find that incredibly disappointing.”

(Really? You go to Patrick Henry College and this is what you find disappointing? We need to have a long talk…)

Sorry. Where was I.

It seems like after the magazine called Farris for comment, he realized he had made a huge mistake. So, without apologizing, he took back his threat: 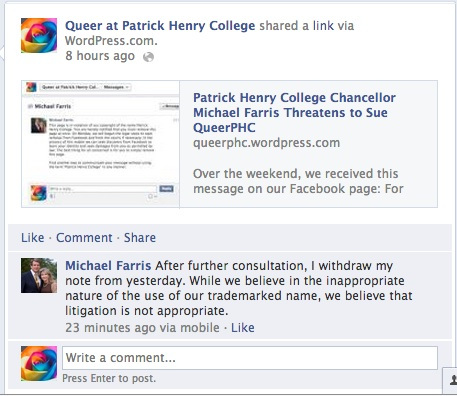 “After further consultation, I withdraw my note from yesterday. While we believe in the inappropriate nature of the use of our trademarked name, we believe that litigation is not appropriate.”

Aww… isn’t that sweet of him? Admitting that “litigation is not appropriate” instead of telling the truth and saying, “I have no case”? (Maybe Farris deserves some credit for writing a few sentences without invoking the Bible. That had to be difficult for him.)

There is a positive note in all of this. The Streisand Effect has kicked in. Even though the QueerPHC blog is blocked on campus — you know the filters are in full force — you can bet students are talking about it. Maybe some of them will even leave their bubble for a moment and realize what sort of lengths LGBT students have to go to so they don’t get caught, all because of the homophobic brainwashing that takes place at schools like Patrick Henry College and the churches that share their mindset.