An Atheist Alternative to a Nativity Scene Goes Up in Milwaukee County Courthouse December 4, 2012 Hemant Mehta

There’s a Nativity Scene in the Milwaukee County (Wisconsin) courthouse. While the Freedom From Religion Foundation has challenged it (to no avail so far), they’ve also put up a sign of their own just to provide an alternative perspective: 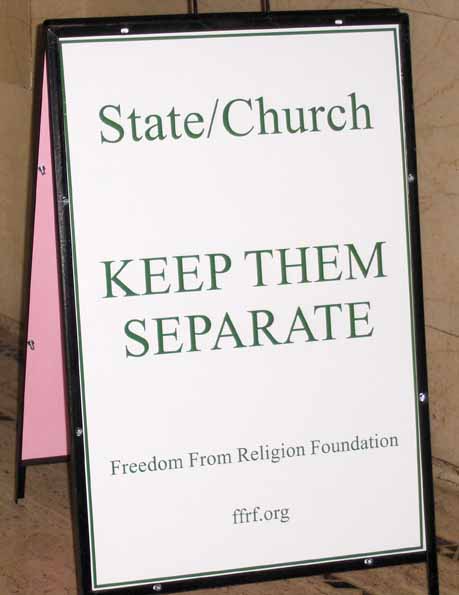 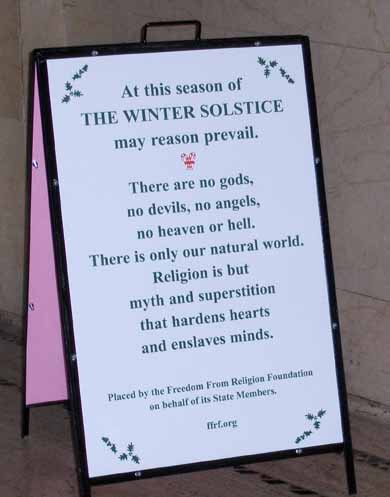 “At this season of the Winter Solstice, let reason prevail. There are no gods, no devils, no angels, no heaven or hell. There is only our natural world. Religion is but myth and superstition that hardens hearts and enslaves minds.”

Giant Nativity Scene. Small sign. Take a guess which one will be the recipient of the most complaints.

“Fifteen percent of Milwaukee County is nonreligious. This is their courthouse, too, supported with their tax dollars, and if religion is going to be there, there has to be ‘room at the inn’ for the nonreligious perspective,” commented FFRF Co-President Dan Barker.

Last week, the FFRF put up a similar sign (and Natural Nativity Scene) in the Wisconsin Capitol building in Madison.

December 4, 2012
According to Gallup Poll, Clergy Members Are Trusted Less Than College Professors
Next Post