Godless Billboards Go Up in Poland, a Country That is Predominantly Catholic December 3, 2012 Hemant Mehta

Godless Billboards Go Up in Poland, a Country That is Predominantly Catholic

In a country where more than 90% of the population is Catholic — Pope John Paul II was born there — it’s a big deal when an atheist group puts up a billboard.

Forget one billboard, though. The Polish Association of Rationalists and a few other groups have put up two.

The first one features three boxes, each of which is checked off. They translate to “Do Not Kill,” “Do Not Steal,” and — the kicker — “Do Not Believe”:

The second pays homage to an American design used by the United Coalition of Reason and says, “Don’t believe in God? You are not alone.” 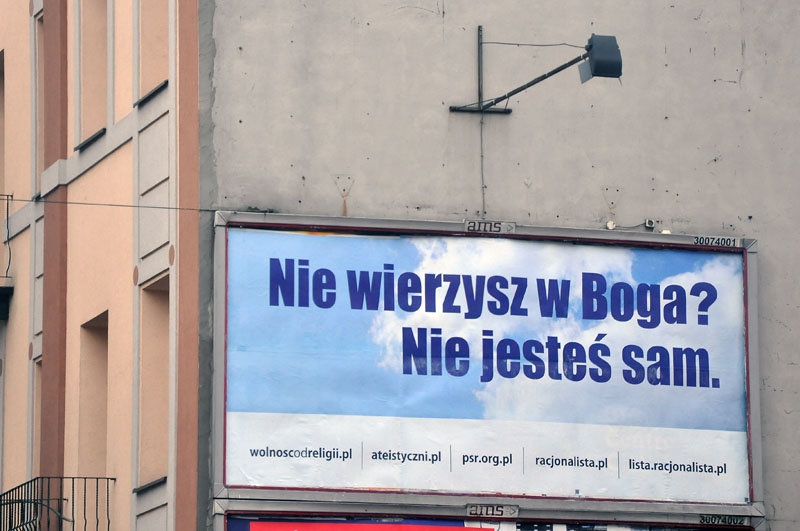 “In a country considered to be Catholic, it’s very hard to be an atheist,” said Jacek Tabisz, president of the Polish Association of Rationalists, one of the organisations responsible for the boards. “Contrary to popular belief, however, there are many of us although not all of us have let our beliefs be known.

“The billboard action is not aimed at believers,” he added. “It is to show people that in a country where the stereotypical Pole is a Catholic there is a large group of atheists.”

Despite the natural opposition to the idea that you can be good without God, there’s been no vandalism to either of the billboards… yet.

December 3, 2012 Indiana Court Upholds Ban on Secular Celebrants Who Want to Perform Weddings
Browse Our Archives
What Are Your Thoughts?leave a comment