The Creationist Wars of 2012TM are underway!

It was only a couple of days ago that Pat Robertson said on The 700 Club that the Earth wasn’t created thousands of years ago as many Christians believe:

Look, I know people will probably try to lynch me when I say this, but Bishop Ussher, God bless him, wasn’t inspired by the Lord when he said it all took 6,000 years; it just didn’t!

And you go back in time, you’ve got radiocarbon dating, you’ve got all these things, and you’ve got the carcasses of dinosaurs frozen in time…

If you fight revealed science, you’re going to lose your children! And I believe in telling them the way it was. 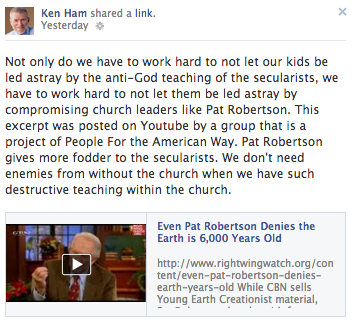 Not only do we have to work hard to not let our kids be led astray by the anti-God teaching of the secularists, we have to work hard to not let them be led astray by compromising church leaders like Pat Robertson. This excerpt was posted on Youtube by a group that is a project of People For the American Way. Pat Robertson gives more fodder to the secularists. We don’t need enemies from without the church when we have such destructive teaching within the church.

Just to be clear, the guy who denies evolution and thinks dinosaurs and humans were BFFs… just criticized a guy who says we shouldn’t ignore sound science… for “destructive teaching.”

That sound you hear is your head exploding.