One of the more interesting aspects of his record-breaking game is the fact that his team beat Faith Bible Baptist college along the way. It’s a school so religious, its website is faith.edu.

In any case, even I feel bad for David Larson, one of the Faith Bible Baptist players. He scored a seriously-incredible 70 points in the same game, and (as they said on SportsCenter) it didn’t even warrant a highlight.

That is, unless you’re at a school that is used to spinning stories to suit your own needs. This is the image found on the basketball team’s website late last night: 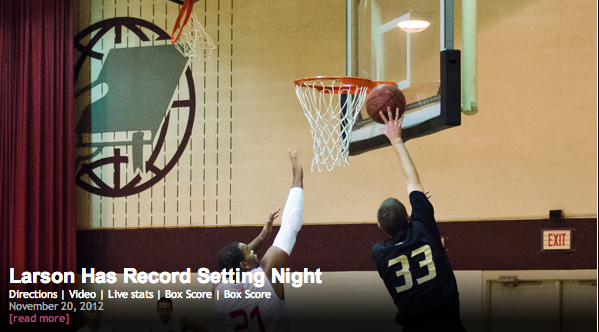 Yes… the night was all about Larson. (In the article that image linked to, there’s one sentence at the very end that mentions Taylor’s accomplishment.)

Obviously, the story here is Taylor and what he did, but it would be fascinating to see some reporters talk about the faith aspect of the game.

By the way, the more you look into the kind of place Faith Bible Baptist is, the scarier it seems. Just a glance at their Student Handbook (PDF) is enough to make you realize how willing some students are to sign their lives over to school officials who want complete control over them.

You’re forbidden from dating anyone other than Christians who have been saved. In other words, stay sheltered and remain with your own kind.

The list of acceptable music isn’t much better. You can’t even listen to Christian music if it “carries a prevalent ‘rock’ beat.” Yikes.

November 21, 2012 Illinois Mayor Angry That a Cross on Public Property Will Be Taken Down
Browse Our Archives
What Are Your Thoughts?leave a comment