A Charlie Brown Christmas isn’t known as a very controversial play, but there is that one scene…

No one really cares about the dialogue when it appears on TV because no one’s going to get mad when you change the channel.

But when an elementary school wants to take your children to see a production of the play — at a local church — you can understand why non-Christian parents might be upset.

“We’re not saying anything bad about Charlie Brown,” said Anne Orsi, a Little Rock Attorney and Vice President of the Arkansas Society of Freethinkers.

“The problem is that it’s got religious content and it’s being performed in a religious venue and that doesn’t just blur the line between church and state, it over steps it entirely.”

Orsi’s group was notified by a parent who received [the field trip] letter. That parent, who did not want to go on camera, told us KARK in a statement that even though she can choose not to allow her child to go, she’s letting her daughter attend the stage production out of concern her daughter could be singled out.

That last point is the key to the whole argument. It’s tough to speak up against something like this because you’re going up against the majority as well as a tradition. It’s even tougher when you’re putting your child at risk of being ostracized instead of just yourself.

That letter home to parents even talked about how religion would be promoted through the play — bold-faced and underlined: 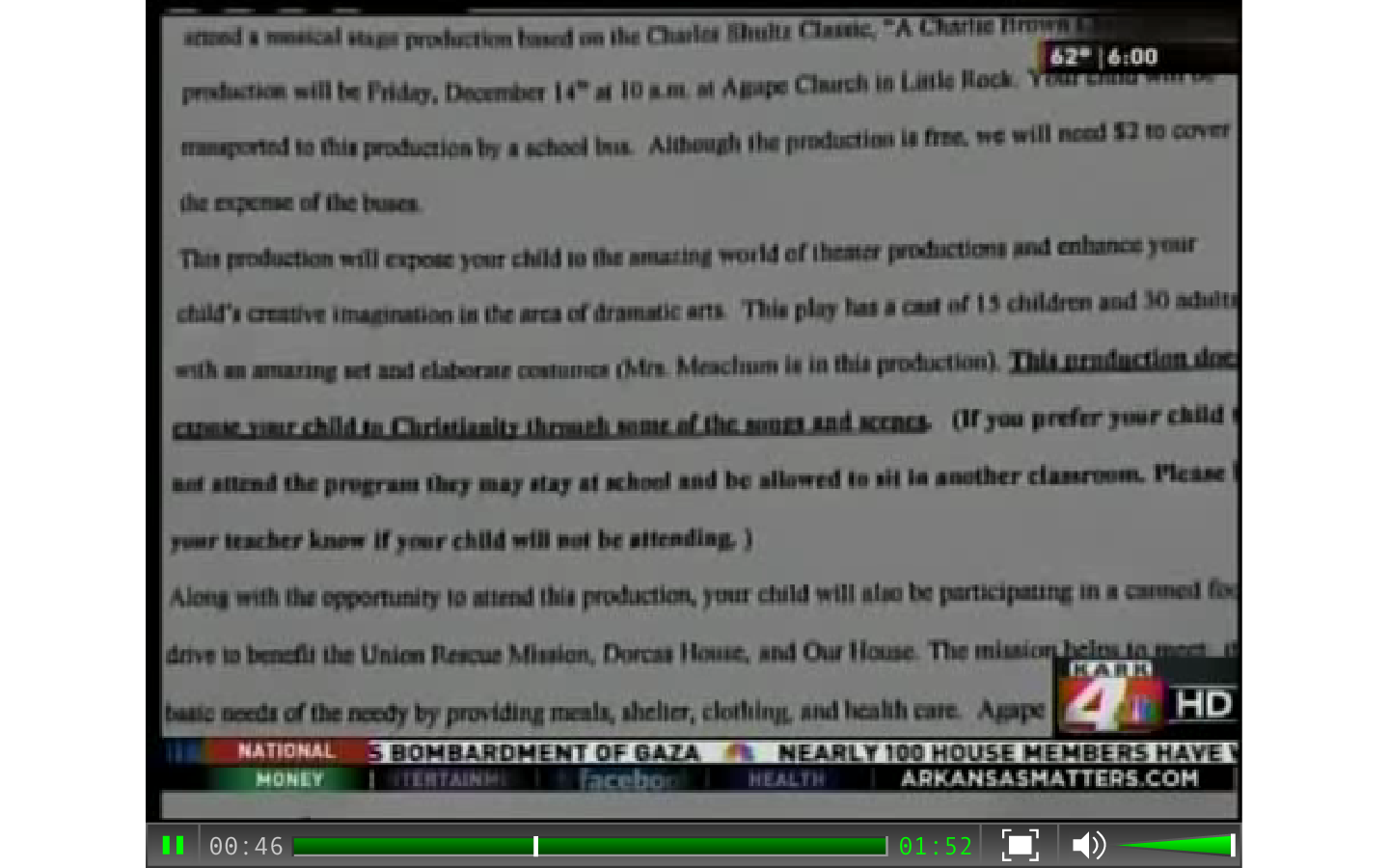 This production does expose your child to Christianity through some of the songs and scenes.

“Expose” is an understatement. It promotes it. And when you have to include that line in your letter to parents, that should be a big red flag that what you’re doing doesn’t belong in a public elementary school.

Can you guess how the church is responding to this?

Some of Agape staffers did say they have held holiday productions for students in the past and no one raised concerns about those shows.

No one ever said anything before, so why would it be a problem now?!

Maybe because Christians just assume everyone agrees with them and it’s downright dangerous in some areas to disagree. You risk losing friends, social status, and respect.

Despite the whining of some conservatives, the atheists haven’t stopped anyone from attending the show. Parents are free to take their children to it on their own time. But the school shouldn’t be sponsoring a trip like this.

Christians would be up in arms if school officials took kids to a holiday production at a local mosque. They should be the first in line objecting to a class field trip to a local church. They’re not, though, because that would be the respectful, right thing to do — and they just can’t bring themselves to do that.

It takes a brave atheist like Anne Orsi to put herself out there publicly in objection to this practice so that the problem can be solved. And she’ll do it alone even if no good Christians in the area are there to back her up.

November 21, 2012
Illinois Mayor Angry That a Cross on Public Property Will Be Taken Down
Next Post