Last month, the Freedom From Religion Foundation put up a series of billboards in Portland, Oregon reading, “This is what an atheist looks like.”

One of them featured local atheist Mark Hecate: 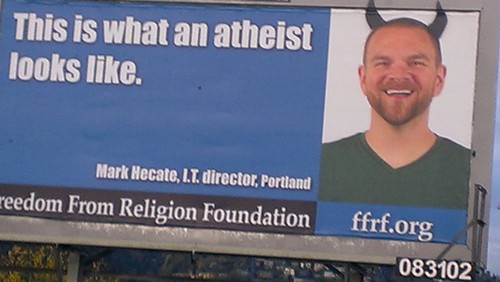 Believe it or not, those horns are not actually his. They were spray-painted on him in an act of vandalism.

[The ad campaign is] a cute idea, showing normal looking folks who are atheists, with the obvious intention of “un-demonizing” them in the eyes of judgmental Christian types. HOWEVER! I have to admit, I got a good guilty laugh out of this bit of spray paint can alteration.

I’m sure he’s a sweet guy and all — but c’mon… you have to admit he makes a great devil! The only thing missing is a word bubble with him saying, “BWAAAA-HAAA-HAAAA!” (And if you want to get technical about it, if Satan really existed, he would totally believe in God. Soooo… never mind?)

I promise you if Christian billboards were vandalized in the same way, the police would be involved and churches would be doing everything in their power to fix the problem. I don’t know how much it costs to replace a billboard. Maybe Clear Channel replaces them for free in situations like this. But if not, it would be a really wonderful gesture for a local church to take a collection for a new billboard… or for people to admit that, even if you disagree with what atheists believe, this is hardly a decent or effective way to communicate those thoughts.