Creationist Ken Ham: The AHA’s ‘Kids Without God’ Campaign is Hitler-esque and Intolerant

This is the Creation Museum’s Ken Ham legitimately brainwashing children with the notion that evolution is bunk and God created us just as we are thousands of years ago:

This is the American Humanist Association’s website aimed at teaching children Humanist values (with the guidance of their parents).

And this is Ken Ham, on Friday, explaining to his Facebook followers that the AHA’s campaign is Hitler-esque and intolerant: 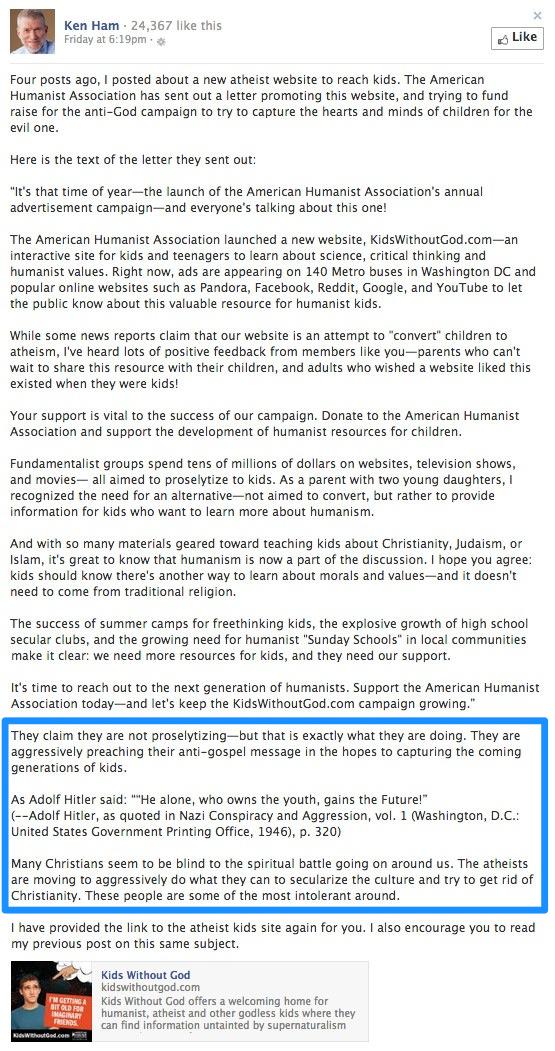 They claim they are not proselytizing — but that is exactly what they are doing. They are aggressively preaching their anti-gospel message in the hopes to capturing the coming generations of kids.

Many Christians seem to be blind to the spiritual battle going on around us. The atheists are moving to aggressively do what they can to secularize the culture and try to get rid of Christianity. These people are some of the most intolerant around.

1) The AHA is not proselytizing. Proselytizing an anti-gospel message would involve saying, “Hey, kids! God doesn’t exist! Now let’s rip up some Bibles.” The AHA’s campaign doesn’t do anything like that. It’s all about positive values, not negative beliefs.

2) Whenever you begin a sentence with, “As Adolf Hitler said,” you’ve lost the argument.

3) I dare you to find anything “intolerant” on this website.

You have to love Ham’s obvious hypocrisy here. He thinks telling children that evolution is junk science and that dinosaurs existed with humans is perfectly fine… but teaching them to be kind, inquisitive, and honest is a form of intolerant proselytizing.

November 18, 2012
What Atheist YouTubers Do You Watch?
Next Post

November 19, 2012 After Atheists Were Treated Fairly by City Officials, Christians Are Suing to Get Special Privilege
Browse Our Archives
What Are Your Thoughts?leave a comment