An Atheist Billboard Gets Mocked… and We Totally Deserve it November 18, 2012 Hemant Mehta

An Atheist Billboard Gets Mocked… and We Totally Deserve it

MSN Now has an article called “15 inappropriate uses of Comic Sans, the nation’s most hated font” and #13 on the list is… not flattering: 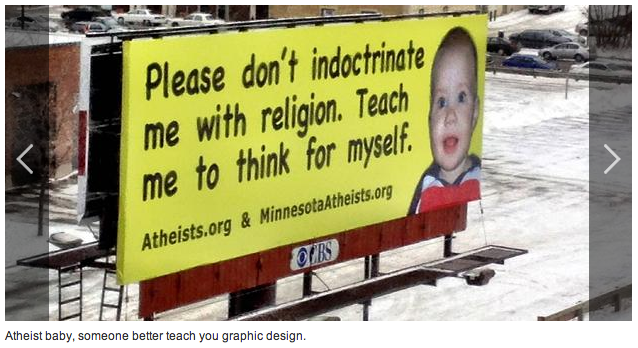 It’s part of a January, 2012 joint campaign by the Minnesota Atheists and American Atheists:

For what it’s worth, that font is actually Chalkboard… so that makes everything ok, right?

In the future, when atheists get all the Vatican money, graphic designers will be wealthy people.

November 18, 2012 What Atheist YouTubers Do You Watch?
Browse Our Archives
What Are Your Thoughts?leave a comment