The Religious Makeup of the 113th Congress November 17, 2012 Hemant Mehta

The Religious Makeup of the 113th Congress

I wrote this post almost word for word two years ago and two years before that. In fact, I just copied/pasted it, updating a few things along the way.

It’s sad how little has changed since then regarding atheists in Congress.

What are the religious affiliations of members of the 113th Congress?

Pretty similar to the American public — Overwhelmingly Christian with a spattering of Jews, Muslims, and followers of other faiths.

Except in one category… 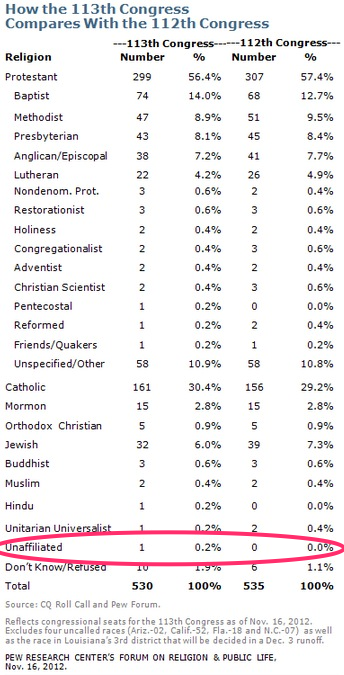 The “Unaffiliated.” We were non-existent in the last Congress. (When Rep. Pete Stark was in Congress, he was listed as a Unitarian.) And we’re almost completely missing this time around, too.

Perhaps the greatest disparity, however, is between the percentage of U.S. adults and the percentage of members of Congress who do not identify with any particular religion. About one-in-five U.S. adults describe themselves as atheist, agnostic or “nothing in particular” — a group sometimes collectively called the “nones.” But only one member of the new Congress, Kyrsten Sinema (D-Ariz.), is religiously unaffiliated, according to information gathered by CQ Roll Call. Sinema is the first member of Congress to publicly describe her religion as “none,” though 10 other members of the 113th Congress (about 2%) do not specify a religious affiliation, up from six members (about 1%) of the previous Congress. This is about the same as the percentage of U.S. adults in Pew Research Center surveys who say that they don’t know, or refuse to specify, their faith (about 2%).

O RLY?! Sinema’s a “None” now? That’s funny, considering her campaign was telling everybody just last week that she is anything but that. But until they correct the Pew Forum folks, I guess we can all break out our party hats. (What’s that? Party’s over? Damn.)

Even if Sinema is a “none,” having only one openly non-religious member of Congress is simply awful. We need to do better than that and get more open atheists elected. To do that, we need more open atheists to run for public office. 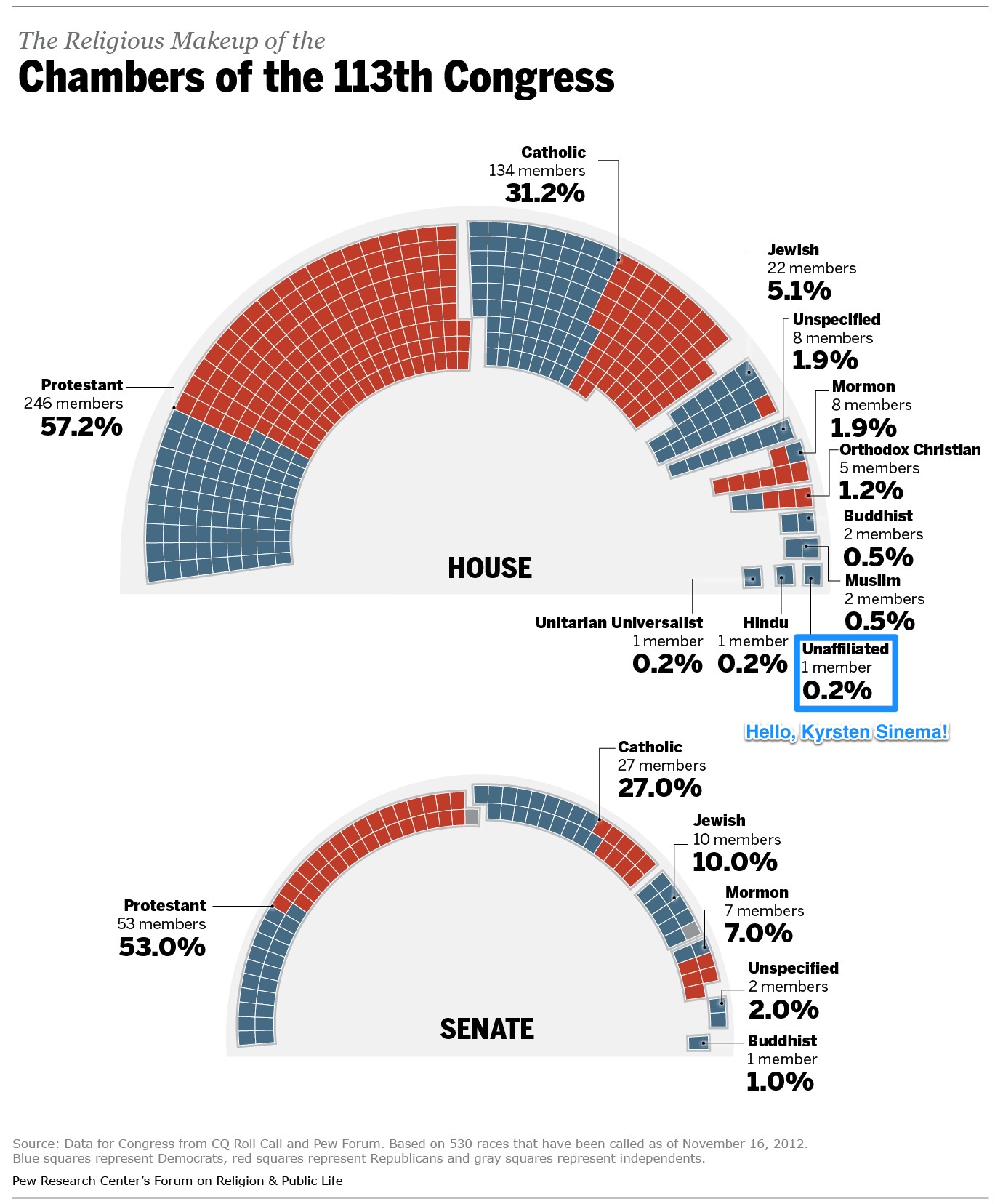 There’s very little doubt in my mind that there are more unaffiliated, non-religious Americans in Congress, but they dare not say so because it would be political suicide where they come from. In the past several years, that pressure to stay in the closet has been pretty bad, but not everywhere in the country… maybe we’ll soon see more candidates at least not declaring a religious affiliation (even if they don’t say “Unaffiliated”).

By the way, who are those 10 members of Congress who are “Unspecified” or who didn’t answer the question (PDF)?

Anyone see a pattern…?

November 16, 2012
DJ Grothe on An Atheist's Purpose in Life
Next Post