Baby Jesus Was Hiding in a Tree All This Time… November 17, 2012 Hemant Mehta

Baby Jesus Was Hiding in a Tree All This Time… 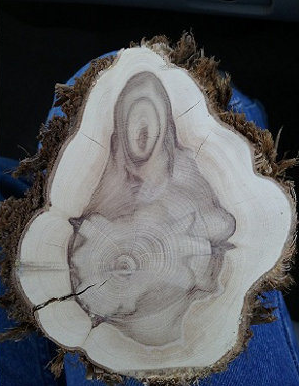 If you guessed “A Dementor holding a Pikachu,” you’d be right… same for all of you who said it was the guy from The Scream exploding from the inside.

A Utah man begs to disagree, though. He says it’s the Holy Mother holding the baby Jesus:

Dean Hansen made the extraordinary discovery about six weeks ago when he and his uncle, Lee Taylor, were in central Utah cutting up pinyon pine wood for tent posts and firewood, KSTU-TV reported.

“When we first saw it, we were like ‘wow,’” Hansen told the station.

Hansen is keeping the 3-inch-thick circle in a safe place while he decides whether or not to put it on display.

I’m guessing Hansen’s going to milk all the money he can out of this vague outline. Though he might as well. Jesus is gonna be pissed when he finds out he just got sawed down.

(Thanks to Zack for the link!)

November 17, 2012
After Refusing to Write About Minor Pledge of Allegiance Conflict at City Council Meeting, Reporter Gets Fired
Next Post

November 17, 2012 Dancing for a Good Cause
Browse Our Archives
What Are Your Thoughts?leave a comment