Another City Has a Taxpayer-Funded Cross Controversy November 15, 2012 Hemant Mehta

Another City Has a Taxpayer-Funded Cross Controversy

On Tuesday night, the Riverside City Council (in California) voted to postpone any decision on the Mount Rubidoux cross until January. 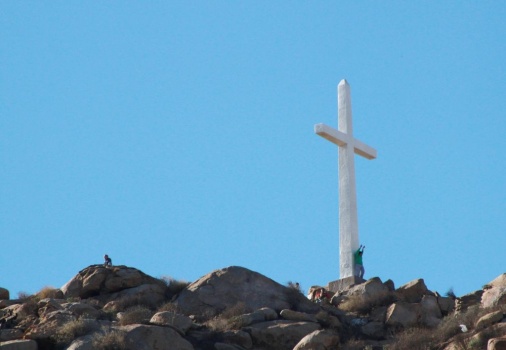 The backstory is this: There has been a cross atop Mount Rubidoux ever since 1907. In 1963, the wooden cross was replaced with a concrete/steel one. So the current incarnation of the cross has been up on the hill for nearly 50 years. The city has owned the land since 1955.

Now, Americans United for Separation of Church and State is threatening to file a lawsuit if the city doesn’t take it down — they argue that the cross violates the Establishment Clause of the First Amendment.

The city now has a couple of options: Take down the cross (which would be easy to do) or sell the land to a private bidder (which seems like the most complicated way to fix an easy problem). They could also fight the lawsuit, but it seems like a ridiculous waste of taxpayer money.

As you might expect, Christians are going ballistic over this because they see this as an anti-Christian group trying to take down their Jesus… oh, and by the way, they add, this cross is totally not Christian at all.

“I brought a little show and tell,” said Trenham, holding up a set of chains. “This is a chain. If the cross goes, you’ll have to take it with this poor body chained to it also!”

Todd Starnes at FOX News radio shares the story of someone who thinks it has to stay because it has personal significance for him… which has nothing to do with how the law works:

When Austin Thompson decided to pop the big question to his girlfriend — he knew there was only one place in Riverside that would work — the top of Mount Rubidoux — under a giant historic cross.

“It’s been up there for over a hundred years, so why is this happening now,” Thompson wondered. “Anything that has to do with Jesus Christ or our Christian faith — people are always going to have a problem.”

This is what I never get. If the Christians just argued the “tradition” aspect of the cross, they might at least be able to convince some judges the cross isn’t religious. Instead, they pretend to be martyrs, thinking they’re soldiers fighting in a culture war — proving to the rest of us that this is all about preserving the influence of their religious, not about preserving a tradition. It’s like they’re giving away the secret to the very people whose job it is to show that this cross is all about promoting Christianity. I’m fine with it. I just don’t get why they’re so ignorant about it.

It gives the AU argument so much more support:

Alex Luchenipser, with Americans United, told Fox News that the cross violates the so-called “separation of church and state.”

He’s right, of course. The cross is the city’s way of pitching itself as pro-Christian and anti-everybody else. It has no business being on taxpayer-funded property. I’m sure there are plenty of churches that would give the cross a fine home. But this isn’t about that. This is all about government promotion of Christianity.

And it needs to be stopped.

Hopefully, the city will do the right thing come January.