New Book Tells Personal Journeys to Atheism for 25 Young People, Including Me

This is a guest post by Dan Riley, the author of the new book Generation Atheist. 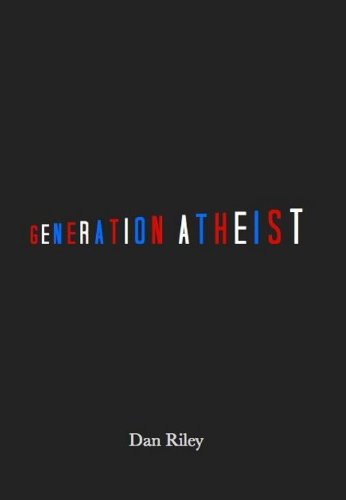 In the summer of 2009, I had an idea that I couldn’t get out of my head. I was a campus organizer for the Center for Inquiry On Campus at the time, and we were about to host dozens of secular college leaders from around the world for our annual summer leadership conference.

The students who came to the conference each held within them a personal story about how they had gotten there: perhaps their flight from dogma came through a moment of clarity late at night while reading a website analyzing the Bible; maybe they had experienced religiously-inspired misogyny or discrimination in their youth and chose to forge a new path; perhaps they had lived through years of their prayers going unanswered and had concluded that God does not exist.

I knew that personal stories like theirs — emotional, complicated, human stories — had been well-documented in books, but they tended to conclude with the people devoting their life to God, getting saved by Jesus, or committing themselves to religion. To the best of my knowledge, not a single book had featured a collection of personal stories of people who had, through struggles and triumphs, ultimately found truth and meaning firmly from the opposite perspective.

I wanted to create that book. That idea has kept me going over the past three years.

Today, I am honored and proud to announce the release of the book Generation Atheist.

From my own journey as a devoutly Catholic altar server to a secular activist, this is a book I would have wanted to read as I was going through my own journey away from religion.

As an out-atheist and former campus organizer, it is a book I now want to give to friends and family who quizzically wonder why anyone would become an atheist, how people become nonreligious, and why I’m still so concerned with religious topics as a nonreligious person.

While the book includes discussions of philosophy and religious texts, these are stories, first and foremost, about people and the lives that they’ve lived. In Generation Atheist, the reader will find personal liberation from fear and cognitive dissonance, a purpose-driven life of secular activism, a struggle to reconcile Christianity and homosexuality, a journey into music to reveal and work through childhood indoctrination, a near suicide caused by the loss of faith and family, ostracism from communities in Louisiana and Rhode Island, and a former medical-student-turned-high-school-teacher-and-blogger readers of this site might be quite familiar with.

When I began this project, I had a hunch that their stories were becoming part of a larger national and worldwide narrative, a hunch that has been confirmed by recent polling data (PDF).

I hope this book can give voice to the growing number of people who view the world through nonreligious eyes. Creating it has been a labor of love.

To celebrate its release and to start a conversation about its stories, I’m giving away 10 copies of this book for free — in either paperback or Kindle format — to people who share with us their own personal journey to becoming an atheist. It may take a sentence or a few paragraphs, but just leave #GenerationAtheist at the end of your comment. I’ll select a group of winners next week.

I hope you will check out the abbreviated introductions of the people in the book on the book’s website. If this book speaks to you or someone you know, I hope you’ll consider sharing it with them.

To the people in this book: thank you again for sharing your lives with me.

To everybody else: thank you for reading. I hope you find these stories as compelling, meaningful, and memorable as I have.

November 14, 2012
How Militant Atheists Are Targeting Children
Next Post

November 14, 2012 Pat Robertson Excuses The Weak-Willed CIA Director
Browse Our Archives
What Are Your Thoughts?leave a comment