Last night, Governor Mike Huckabee went on The Daily Show to discuss his forthcoming book.  Host Jon Stewart had a couple questions for him regarding a commercial he put out for the election, calling Christian voters to “vote the values” because their vote will be tested by fire.

Below is a transcript of their conversation — it’s not short, but there are some interesting points raised:

Jon Stewart: …I think what is an important issue is that when you keep demonizing these groups — whether it be single women, black people, illegal immigrants — it makes it impossible to work with them as a collaboration.  Why would you collaborate with evil people?  And when you convince them that they’re evil, why would you work with them?

Mike Huckabee: I’m not going to defend that. And I hope you wouldn’t defend that every time Christians are depicted on many of the talk shows, they are depicted as homophobic, racist, unscientific…

JS: Well, don’t confuse that, though, when people are not being scientific or when they’re against gay marriage.  You can argue with someone about gay marriage and not call them homophobic. You can challenge someone on climate change when they pretend that it doesn’t exist and say “That’s unscientific” because that is unscientific, that’s a fact.

MH: One of the most fundamental conservative views is that of being pro life, that every life has value and worth. That’s scientific because you know that, biologically, life begins at conception. That’s irrefutable from a biological standpoint. You can argue the theology of it, you can argue the philosophy of it; you can’t argue the biology of the beginning of life.

I wanted to jump in here, because I think what Huckabee is doing is a bit dubious.  Even if I grant him that life begins at conception (I understand that there is not a scientific consensus on this), it does not follow this life has value and worth.  That’s something that he attached to the meaning of “life” and it is most certainly not “scientific” as he claims.

JS: You can’t argue that something isn’t happening.  But I don’t know that… I mean that’s such a loaded… well here’s why I asked you.  Because I never know who you are anymore. I don’t know if you’re the nice grandfather who sits and writes letters to them…

MH: I am a wonderful grandfather!

JS: …and talks to me very respectfully or, there was a commercial that you made during the election that troubled me to some extent.

The ad (and transcript) that is shown can be found here.  Suffice it to say that there is a lot of fiery imagery, a blacksmith forging words like “FREEDOM” and “MARRIAGE” in steel, and Huckabee saying things in voice-over like “Marriage should be reinforced, not redefined” and “Your vote will affect the future, and be recorded in history.”

MH: I’m glad you brought that one up.

JS: Here’s… when I look at that I go “Are you saying that if you vote for the Democrats, you’re going to hell?!”

JS:  ‘Cause it sure looked like hell. I mean… I’m going to hell anyway. I’m a Jew… But my point is, can you understand how someone can watch that and go, “So wait, if I disagree with you about gay marriage, I’m going to hell?”

MH:  If they’re biblically illiterate, they would.  But if they knew 1 Corinthians 10, the whole metaphor of the Christian gospel they would…

JS:  (to audience) Settle down, guys, this is not… we’re talking.

MH:  Listen to me!  Seriously,  that whole metaphor is that about that your works are tested by fire and that biblical passage is one that every believer — every New Testament believer — is gonna understand what that means.  And I heard people on television say: “Oh, Mike Huckabee is saying that if you don’t vote for Mitt Romney, you’re going to hell!”… never said that! Never said Romney, never said Obama…

JS:  I think there’s a pretty good connection between that and hell.

MH: No, there’s not!  1 Corinthians 10.  Read it, Jon, and it talks about our works are put through the test of fire just like you would put metal in the forge, and that was the imagery that you see.

JS: But you narrowed your works to two things: Pro-life or anti-gay marriage.

MH:  Not “anti-gay marriage.” There’s a difference between “anti-something” and if you’re “for” something.

MH:  I’m for the idea that marriage is that which is a biblical model.

JS:  Do you agree with this?:  That it is the height of man’s arrogance to presume what Jesus would vote for down the line for whatever it was?  As a value?  This is my point:  We can come on and have a conversation, but when I see that and I go, “Mike Huckabee doesn’t just disagree with me; he believes that my position — that gay people are members of the species and whoever they love, marriage strengthens traditional families because gay families are wonderful families, raising wonderful kids, and the value of them is not their gay-ness.  Marriage is about honest, trustworthy people working in a loving household having nothing to do with their sexuality is… how can you say that me believing that is registered in the book of fire.

JS:  The anvil of fire, with the fire guy.  Do you know what I’m saying?

MH:  I’m going to have to teach you what it is to go to a blacksmith shop and how you create…

JS: You’re saying all of this is going to be in a metal book?

MH:  No!  Jon!  The point of all of this is, it is a message to Christian believers saying to them your vote cannot be separated from your faith and all of our works are gonna be tested as if by fire.

JS:  Let me ask you this:  What if they voted for someone they felt wasn’t good for poverty, wasn’t good for programs for the poor?  Is that going to be recorded in the same way as the gay marriage vote?

MH: Well, we only had 60 seconds.  You pick and chose what you want.

JS: Here’s why it’s upsetting: When I speak with you, I always enjoy it; I always find it very respectful, I always learn an awful lot about points of view that I don’t share.  And when I see something like that, I think to myself, “Well that guy then leaves me, and turns around and goes, ‘I don’t care what he thinks, that guy is going to hell anyway.'”

MH:  Well if you had asked me — I’ll give you my number- I would have said, “Jon, this wasn’t about hell! It was about that our works are tested, and they’re tried.  And the way you create something of value, you get rid of all of that dross, the things that are impure, and you end up with something that has value.”  And that was the message coming directly from 1 Corinthians 10.

JS: I would say it is not an unreasonable interpretation of that commercial that if you vote for gay marriage or for a pro-choice candidate, God is writing it down, and he gon’ getcha.

JS: No, no, no, it is not the standard we have in this country, the Constitution is the standard in the country.

MH:  It is, but the Constitution is still based on what the people decide-

MH: Look, Jon, still the point comes that as we as society create laws, it is, in essence, the consent of the governed.

JS: But I think we have to have an honest and open conversation, and not one on one channel and one on another.  I think you have to open that conversation up and say… In the same way that when someone say’s they’re pro-life from conception, I think people need to know that that means the law would be if you’re raped, you have to keep the baby, but you don’t get an IVF baby, cause that’s against the law. Like, I think those kinds of things have to be discussed openly and honestly.

JS:  We have.  In many ways… we love each other.  Do you know what I mean?  Alright, we’ll go.  But do you get, at some level, where my dissatisfaction is coming from?

MH:  No. I never will understand your dissatisfaction, Jon.

The most interesting part of this conversation, to me, is Stewart’s point about voting for candidates who aren’t good for poverty.  Jesus was pretty clear about the whole “take care of the poor thing”.  But there aren’t people standing on street corners saying that cutting social programs for disenfranchised families is an affront to God.

I think, if nothing else, this was a conversation between two men who, fundamentally, couldn’t seem to understand the other.  I found it really telling when Huckabee ended it with “I will never understand where you are coming from,” whether he said it tongue-in-cheek or not (I don’t think he did).

Because I could have said the same thing about everything he said. 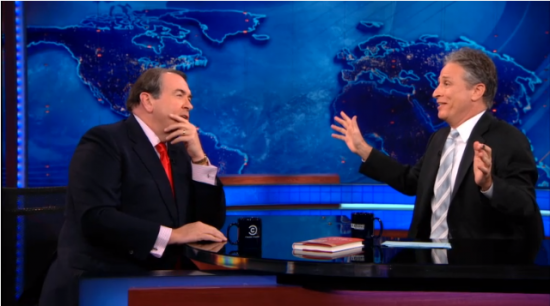 I sincerely have no understanding of why a person thinks it’s so important to prevent a gay couple from getting married to abide by the word of the Bible, while there are kids who need loving families to be adopted into, or while there are people literally starving in the streets.

I think, though, that we do have to keep talking and trying to understand where the other person is coming from.  I just worry that the two sides will never see eye to eye.