The American Humanist Association has launched a $30,000 online and bus ad campaign in Washington, D.C. and Moscow, Idaho pointing to a new website for strengthening and supporting children and young adults who don’t believe in a God:

“Whether they already made up their minds to reject supernatural explanations, or are just questioning, it’s time to make available an online resource that’s built just for kids without God,” said Roy Speckhardt, executive director of the American Humanist Association. “These kids may be from traditionally religious families, or from families like that of President Barack Obama, whose mother was a secular humanist. KidsWithoutGod.com will be a friendly online community for kids who might be too shy to ask an adult directly what it’s like to be good without a god.”

On the new website, the character Darwin the Dog walks little kids through what it means to be a Humanist: 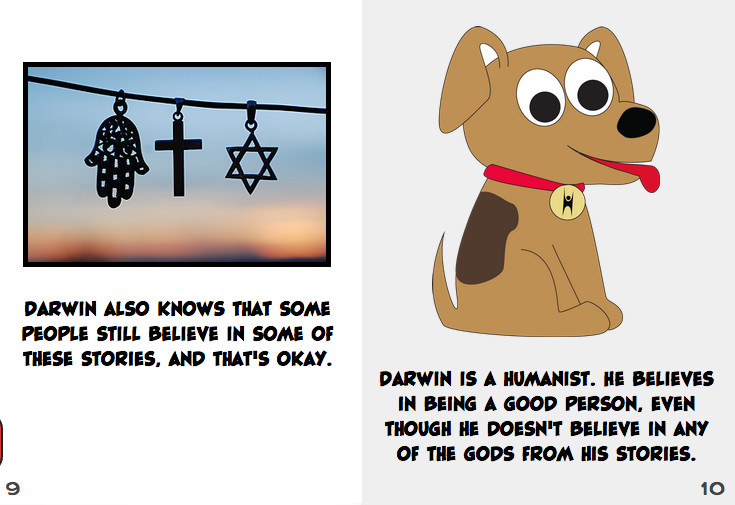 There are also instructions for a number of science experiments they can do at home with their parents’ help.

For teenagers, the site steers toward issues they may come across at school (like saying the Pledge of Allegiance or coming out to their friends) or in their personal lives.

And for parents, there is information on how to use the site with your children and raise your kids without religion.

The AHA also points out this piece of interesting news:

Requests to purchase ads on websites run by Disney.com, National Geographic Kids and Time For Kids were turned down based on the content.

Riiiight. Can’t have kids thinking for themselves or being raised to believe they can be moral without going to church.

Just to be clear, this site isn’t here to brainwash children. It doesn’t say you’re a bad child or that you’re going to hell if you disagree. It’s to encourage kids to think for themselves and discover the world on their own (or with the guidance of their parents). That’s sorely needed right now.