Intel: If the Boy Scouts Continue to Discriminate, We Won’t Give Them Any Money November 11, 2012 Hemant Mehta

Intel: If the Boy Scouts Continue to Discriminate, We Won’t Give Them Any Money

The Intel Corporation has a great program to encourage volunteering: For every hour an employee volunteers for an organization, they’ll give that group $10. Last year, that amounted to $8,200,000 in total.

The Boy Scouts of America have been one of the biggest beneficiaries of Intel’s donations, but that’s about to change for good, now that Intel has changed its own rules to require the groups getting money to be non-discriminatory… and the BSA is anti-gay and anti-atheist: 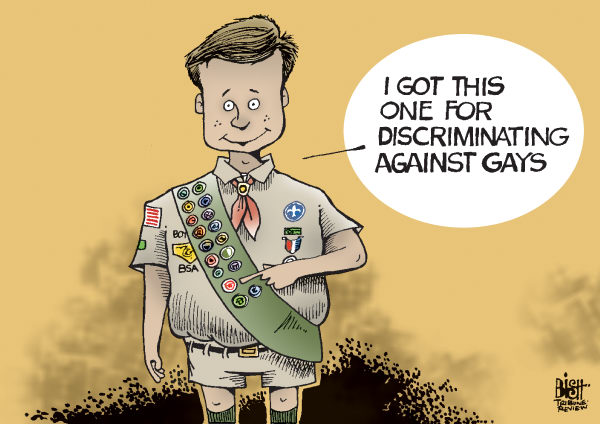 “At the end of the year, to get their grants, we’re going to require them to send a letter that they are in compliance with our nondiscrimination policies,” [Intel spokesman Chuck] Mulloy said.

“We feel strongly about the underlying values that are Intel, very strongly that we have a nondiscrimination policy on a wide variety of issues,” he said. “And if you aren’t complying, you shouldn’t be asking us for money.”

In a statement, the national Boy Scouts said it respects Intel’s decision. But the organization isn’t changing its policies.

“We fully understand and appreciate that not everyone will agree with any one position or policy; however, we believe a strong partnership does not require full agreement on every societal issue,” wrote Deron Smith, spokesman for Boy Scouts of America.

To paraphrase, the BSA refuses to accept gays and atheists into their organization, even if it means turning down hundreds of thousands of dollars that could benefit their members. Some may see that as a tough stand on principle. I see it as doubling down on bigotry.

Their exclusion of gays and atheists has hurt them in all sorts of ways — like the loss of great potential scouts and the loss of goodwill among donors. It has gained them nothing. Yet, they still persist with this absurd notion that you must share their beliefs on God’s existence and proper sexuality to be worthy of admission into the group.

Good on Intel for making sure they’re only giving to organizations meant to include everybody instead of just a select majority. It’s the BSA’s loss.

November 11, 2012
GOP Extremism Will Doom Its Future Prospects
Next Post