Springfield, IL Mayor Plans to Hold Prayer Breakfast, but FFRF is on His Trail

This is the image that is currently on the city of Springfield, Illinois’ website: 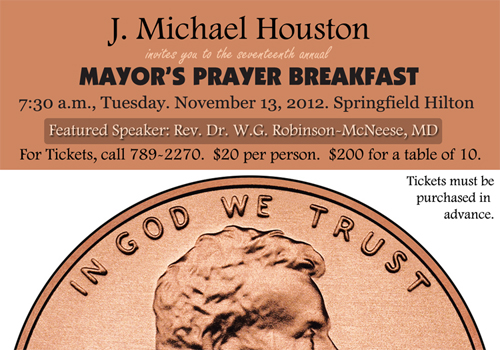 It raises a couple of questions:

“[I]t is grossly illegal and inappropriate for the city to be hosting, organizing, supporting or otherwise promoting a patently religious event, such as a prayer breakfast,” [FFRF staff attorney Rebecca] Markert added. “This practice, which has been recurring for the last 17 years, certainly has the effect of government endorsement of religion.”

In a letter of complaint (PDF) sent to the Mayor by the Freedom From Religion Foundation, Markert explains another reason prayer breakfasts should be stopped:

The events, even if deemed interfaith, notably exclude those of no religious faith — the non-religious and the non-believers…

In addition to the letter, Markert also requested the following open records:

If nothing else, that ought to give the Mayor a good scare. If he’s smart, though, he’ll realize he’s been caught and just cancel the event altogether.

November 7, 2012 God is One Sneaky Little Man...
Browse Our Archives
What Are Your Thoughts?leave a comment