Congrats to Spain, where a court has upheld a law allowing same-sex marriage! 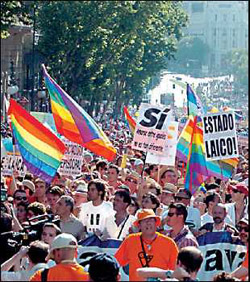 The legalization of same-sex marriage was passed back in July of 2005.  Within 3 months, the right-leaning Popular Party (that of current Prime Minister Mariano Rajoy) had filed an objection, contesting the use of the word “marriage” to describe anything besides a union between a man and a woman.

Justice Minister Alberto Ruiz Gallardon was having none of it.  The appeal was dismissed today by an 8-3 vote:

In its ruling, the top court simply said it “rejected the appeal” by more than 50 members of the Popular Party who had argued the law was not constitutional.

Interestingly, shortly before the decision, Rajoy clarified what his party had a problem with, specifically:

“We appealed not because the union of two people of the same sex would have legal effects, that did not matter to us,” he told Cope radio.

“The only thing we appealed was the name, that is to say the word ‘marriage’ was the reason for the appeal.”

The Associated Press points out that 22,000 same-sex marriages have taken place in Spain. Those couples no longer have to worry about their marriages getting nullified.