At Iota High School in Louisiana, students and parents and athletes and local residents have no idea what the law is when it comes to prayer at football games.

The law is simple: The school cannot sponsor prayer. Neither can anyone representing the school.

Last month, however, a priest gave an invocation before a football game and no one said anything about it. That’s illegal and Superintendent John Bourque knew it, which is why he later urged everyone to let student volunteers lead the prayers instead:

Bourque says [he] wants students and parents to understand, its illegal for an adult to lead prayer at an athletic event whether we like it or not.

“Its possible to have prayer at football games, if a student volunteers then it can be done,” said Bourque.

Technically, he’s right. No one can stop volunteers from praying as long as they’re not representing the school.

So what happened Friday night?

The football players prayed. The cheerleaders prayer. And two student volunteers took over the loudspeaker system and prayed. 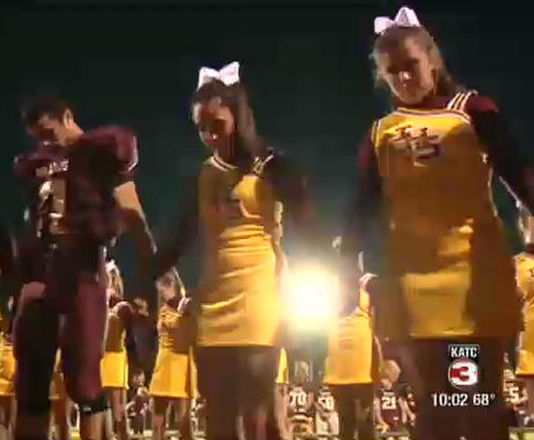 They still don’t get it.

I know I’m not a lawyer, but the Supreme Court already declared this practice of praying over the loudspeakers illegal in Santa Fe Independent School Dist. v Doe (1999):

In a 6-3 opinion delivered by Justice John Paul Stevens, the Court held that the District’s policy permitting student-led, student-initiated prayer at football games violates the Establishment Clause. The Court concluded that the football game prayers were public speech authorized by a government policy and taking place on government property at government-sponsored school-related events and that the District’s policy involved both perceived and actual government endorsement of the delivery of prayer at important school events. Such speech is not properly characterized as “private,” wrote Justice Stevens for the majority. In dissent, Chief Justice William H. Rehnquist, joined by Justices Antonin Scalia and Clarence Thomas, noted the “disturbing” tone of the Court’s opinion that “bristle[d] with hostility to all things religious in public life.”

How the KATC news report completely ignores any mention of that case is baffling to me.

Superintendent Bourque knows the law, though. He has to know this is illegal and he can put a stop to it immediately. His job is to run a public school, not a worship service promoting Christianity over all other systems of belief. If he can’t implement a simple, strict policy to make sure all of his students are treated fairly — as required by the law — at school events, he should resign immediately.

(Thanks to Randall for the link!)

November 4, 2012
Do You Have Friends Who Live In Washington State?
Next Post

November 4, 2012 An Ad in Houston Reaches Out to Gay Atheists
Browse Our Archives
What Are Your Thoughts?leave a comment