In Chile, An Atheist Preaches Science in Front of a Church November 4, 2012 Hemant Mehta

In Chile, An Atheist Preaches Science in Front of a Church

This is what you miss when you don’t read Chilean newspapers. 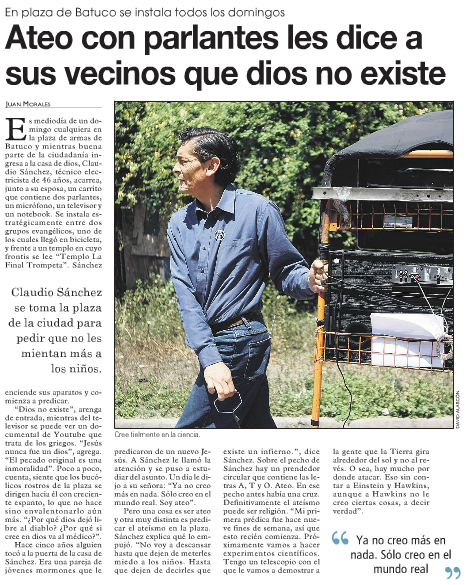 TL;IS;DR (too long; in Spanish; didn’t read): An atheist with a loudspeaker is telling his religious neighbors there’s no god 🙂

Reader Ignacio was kind enough to provide a rough translation:

It’s noon on a normal Sunday on the Batuco main square, and while a good portion of the people are attending mass, Claudio Sánchez, a 46-year-old electrician, sets up, with the help of his wife, a small cart carrying 2 loudspeakers, a microphone, a TV screen, and a laptop. He sets himself up strategically between two evangelical preachers and in front of an evangelical church where a sign reads “The Final Trumpet Temple.” Sanchez turns on his equipment and starts preaching.

“God doesn’t exist,” he says to the people around him, while the TV screen plays a YouTube video about the Greeks. “Jesus wasn’t a god,” he adds. “Original sin is immoral.” Little by little, he feels the apathetic crowd start paying attention in shock, which only encourages him to press on. “Why did God set the devil free? if you believe in God, why do you go to the doctor?”

Five years ago, someone knocked on Sánchez’s door. It was a couple of young Mormons who preached to him about a new Jesus. This caught Sánchez’s interest and he started studying the subject. Then suddenly, one day, he told his wife: “I don’t believe in anything anymore, I only believe in the real world. I’m an atheist.”

But it’s one thing to be an atheist, and another to preach your atheism on the street. Sánchez explained what motivated him to do so: “I won’t rest until they stop putting fear into children’s minds, until they stop telling them there’s a hell.” On Sánchez’s chest, where a cross used to be, there’s a pin with the letters A, T, and O. [Ignacio adds: A, T, and O, when read in Spanish, sounds like “A-TE-O,” which means “atheist.”] Definitely, atheism can be a religion. [Ignacio adds: That is the journalist’s opinion, one with which I disagree.]

“I first preached nine weeks ago, so this is only the beginning. Soon, I plan to perform some scientific experiments here. I have a telescope which I will use to show people the earth revolves around the sun, and not the other way around. I mean, there are a lot of subjects to tackle. You can tell them about people like Einstein or [Hawking], although there are some things [Hawking] says that I do not believe are true.”