***Update***: Changes to the title and text of this post have been made since it initially went up. I apologize for any confusion.

The Christian group Liberty Institute put out a press release yesterday that shows just how desperate they are to give off the impression that they’re winning.

It’s in response to the Freedom From Religion Foundation sending letters of complaint to schools that allow cheerleaders to hoist banners with Bible verses on them at football games: 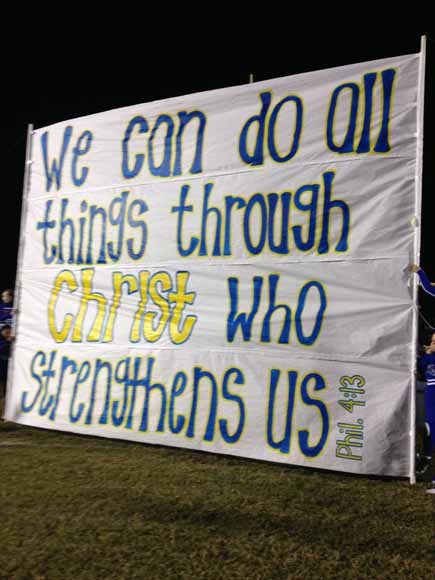 “We are writing to affirm that public school administrators are acting appropriately and lawfully when they allow student-led, student-initiated forms of speech, even if that speech happens to be ‘religious’ in nature,” said Liberty Institute Senior Counsel Mike Johnson. “No student should ever have to leave his or her religious beliefs or expression at the school house gate. Thanks to the precedent set with our victory in Kountze, superintendents should feel empowered to resist the bullying tactics of atheist groups, because federal and state law prohibiting government censorship of students’ free speech is well established.“

As to the first part, FFRF is in full agreement. Students always have the right to free speech and the freedom to express their religious beliefs. When they’re representing their public school at a school-sponsored event, though, that right goes out the window. That’s why, for example, Christian students can’t preach the Bible at student council meetings.

The question is what happens when students put on their cheerleading uniforms. Are they school representatives or not? The FFRF says they are, which is why they shouldn’t be allowed to hold up the Bible banners. Liberty Institute says no, which is ridiculous. By their logic, the football team ought to be allowed to do a mass public prayer during a big game because they’re just students, not representatives of the school.

As to the second part, I find it very misleading to suggest this small “victory” has the same force of law as a final decision. No precedent has been set and no victory has been awarded to the Christians in Kountze, Texas. All the judge has said is that the court will make a final decision on the matter sometime next summer. In the meantime, the banners can stay up. That’s not necessarily victory. That’s just a temporary reprieve.

A judge stopped an East Texas school district on Thursday from barring cheerleaders from quoting biblical scripture on banners at high school football games, acknowledging their argument that is appears to violate their free speech rights.

It’s very likely that the court will decide in June that these banners are unconstitutional and need to come down for good.

Until then, Liberty Institute is squirming over the fact that Christian athletes aren’t able to get away with things they’re used to getting away with. We need to keep the pressure on them.

October 30, 2012 Atheist Group Holds Ladies' Night
Browse Our Archives
What Are Your Thoughts?leave a comment