Pete Stark Is Fighting for His Seat in Congress and His Opponent is Using His Atheism Against Him October 26, 2012 Hemant Mehta

Pete Stark is currently the only open atheist in Congress. In 2007, he went public with his non-theism thanks to urging from the Secular Coalition for America.

On November 6th, he may be out of a job.

He’s running in a very close race against his challenger Eric Swalwell (also a Democrat). There’s no polling in his district to find out exactly where he stands but local press is saying that, for Stark, this is a “fight for his political life.”

So why should you care about Stark? Because he’s an atheist?

No. That’s never reason enough to vote for someone. You should care because Stark is a strong liberal and his record speaks for itself:

Stark first gained national attention as the “hippie banker” who, during the Vietnam War, put a peace symbol on the headquarters of the bank he founded in the East Bay. He was an architect of landmark legislation that allowed workers to extend health coverage for a time after leaving their jobs and required emergency rooms to screen and stabilize anyone who showed up at their doors, regardless of their ability to pay. He also played an important role in developing the 2010 Affordable Care Act, President Obama’s healthcare law.

He also has called for cutting the defense budget and creating a Department of Peace. He once voted “present” on a resolution wishing former President Reagan happy birthday. And he voted against etching the words “In God We Trust” into the U.S. Capitol Visitor Center, saying he didn’t believe in a supreme being.

Again, I’m not suggesting you vote for or support Pete Stark just because he’s an atheist, but Stark is also a good Congressman when it comes to issues regarding the secular community. He voted against expanding federal funding for religious schools in Washington, D.C. He has supported LGBT rights for a long time. Same with women’s rights.

Since many Democrats vying for public office agree on those issues, how can Eric Swalwell distinguish himself? Well, he decided to use Stark’s atheism against him. Last year, Swalwell issued a press release denouncing Stark for voting against reaffirming “In God We Trust” as our national motto: 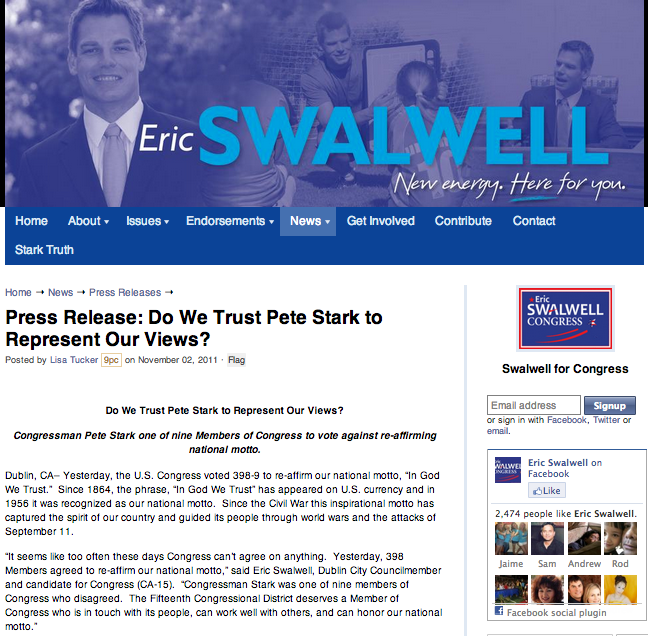 “It seems like too often these days Congress can’t agree on anything. Yesterday, 398 Members agreed to re-affirm our national motto,” said Eric Swalwell, Dublin City Councilmember and candidate for Congress (CA-15). “Congressman Stark was one of nine members of Congress who disagreed. The Fifteenth Congressional District deserves a Member of Congress who is in touch with its people, can work well with others, and can honor our national motto.”

Swalwell may be a Democrat but he has no problem throwing Stark under the bus for voting against a meaningless resolution that was just there to promote God in government. That’s not the kind of press release you issue if you want votes from Secular Americans. Yes, campaigns can be brutal, but attacking Stark for a vote that was in our interests shouldn’t go unchallenged.

Meanwhile, thanks to attacks like that, Pete Stark is getting beaten when it comes to campaign contributions.

If we want political clout, it means we have to deliver in situations like this.

So if you’re in the 15th Congressional District, vote for Stark.

But if you’re not there, like me, you can still donate to Stark’s campaign. Please do so. This appears to be a very tight race and a last minute surge could help keep Stark over the top.

Also important: Imagine what it would mean for other politicians if a candidate was elected to office because of the support from the freethought community. It could even inspire other candidates to come out of the closet with their atheism.