Our Night at an ‘Unpacking Atheism’ Simulcast Run By Christian Apologists

This is a guest post by Dorothy Stephens. She is a nurse, a grandmother, and a member of the Humanists, Atheists, and Agnostics of Manitoba. 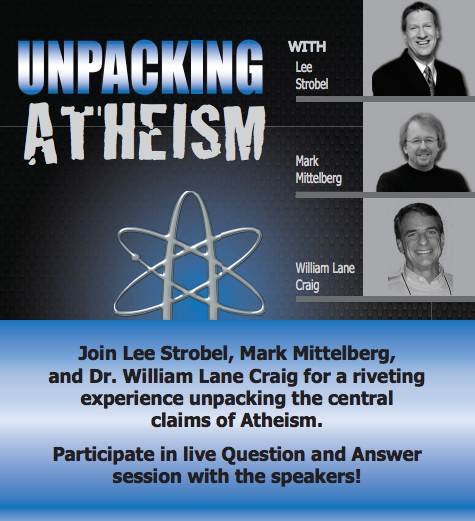 The video first showed a billboard erected by the Colorado Coalition of Reason claiming that “God is an imaginary friend.” The two then stated that atheists are probably among those you know and that atheism is on the rise, especially among young people. They propose to address the “rise of the influence of skepticism,” at this worldwide simulcast. At the event, they would be joined by William Lane Craig, as well as a panel of former atheists.

Below the video is the statement “Atheism is on the rise,” followed by a list of “sobering facts”:

With that, they vowed to meet the challenge of “militant atheism” head on.

When one of the members of the Humanists, Atheists, and Agnostics of Manitoba discovered that a local Winnipeg church was going to host this broadcast, we just had to get a group together and check it out. These guys sounded like they were running scared! What were they more afraid of: Loss of numbers or loss of revenue? Maybe loss of influence and privilege?

Six of us eventually went to Grant Memorial Baptist Church in Winnipeg. We anticipated a large crowd, but instead of the simulcast being held in the church itself, it was in a smaller room. At most, there were about 150 people there.

The whole event was underwhelming from start to finish.

The opening featured a video clip of William Lane Craig at his debate with Christopher Hitchens, then cut to Strobel and Mittelberg sitting on a stage, remarking about the number of locations hosting the simulcast — about 150 venues throughout North America, mostly churches, with a few college campuses. The stage was stark and plain, bare except for a no-frills table and chairs. No audiovisual aids, no graphics, nothing to augment their conversation at all. The simplistic presentation could have been done by any YouTube-r in his or her garage. We had expected a much glitzier event. The hosts then reiterated the recent Pew Forum survey results about the rise of the “Nones” within young people. This became a recurrent theme — in describing the “problem” of atheism, they actually made quite a case for atheism.

William Lane Craig soon joined them and related his personal testimony, full of stock phrases like “spiritual rebirth,” “call to ministry,” and “found Jesus.” He talked about attending Wheaton College where he studied every subject from a Christian perspective. Then he defined Old Atheism and New Atheism.

The difference, he said, is that the militant New Atheists wanted to “exterminate” religion from private life, not just from the public square. Furthermore, they referred to believers as “the enemy.” He went on to discuss the proof needed for atheism or theism and predictably tried to lay the burden of proof upon the atheists, who he says are making a truth claim that “There is no god,” which wrong defines atheism while tricking the audience into thinking theism ought to be the default way of thinking.

There was some mention of common atheist arguments, but the only one actually discussed was the problem of evil, which Craig attributed to the “emotional anger” of atheists. He said that the existence of evil proved the existence of God and then went off into the “objective moral values” argument. From that he segued into his well-known spiel: God is the explanation for all that exists, the fine-tuned universe, the cosmological argument, etc.

He briefly criticized physicists, specifically Lawrence Krauss, saying that they failed to define the term “nothing” when talking about a “universe from nothing.” From there, we got the “who created God?” argument — his answer is no one; God doesn’t need a creator since he is “beginningless and timeless.” Following this, he explained his evidence for Christianity, mainly the resurrection argument: Jesus was in the tomb, the tomb was empty, groups of people saw him alive after he rose, his disciples saw him and believed… therefore, Christianity is true.

He mentioned miracles but said they do not contravene the laws of nature because if God caused them, the laws of nature did not apply. This whole segment was a demonstration of cognitive dissonance. It seemed unbelievable that an educated man could twist his mind the way he did. A lot of time was spent on this discussion. In fact, Craig got the whole first hour, after opening remarks. There was nothing in any of his arguments that anyone who has watched his previous debates on YouTube has not heard multiple times. The only advantage for him to present them in this format is to have the opportunity to present them unchallenged, for a captive audience of the converted, who are not clamoring to hear the other side.

In addressing atheists, Craig admitted that they can live moral lives, but insisted that God is the basis for morality whether people believe in him or not. He claimed to have won all his debates and expressed a fondness for Hitchens, referring to him as a “curmudgeonly uncle.” But he obviously had no such feelings for Richard Dawkins, dismissing him as a “professor of public relations or something,” and mocking the fact that Dawkins has refused to debate him.

The second hour consisting of conversations with two “former atheists.” This would be laughable if it weren’t so sad. The first was Holly Ordway, an English professor who described her Pagan upbringing and secular education. She described Christians as “pushy and obnoxious”; in fact, throughout her whole talk (lasting more than half an hour) she described the atheist position so well that she didn’t seem credible as a Christian apologist at all, making some of us wonder if religion will be a passing phase for her. She talked about her study of literature and mentioned Christian authors J. R. R. Tolkein and C. S. Lewis as her favorites, then said it was her fencing coach that brought her to Jesus. Her arguments made little sense. For example, she described finding Jesus through Narnia. She stated that even after she accepted Jesus as her savior, she still didn’t love him, but then her pastor told her that “obedience is love in action.” Scary! At the end of her testimony, she admitted she still has doubts.

The final speaker was fellow ex-atheist Randall Niles, who said he was raised Christian, then became a skeptic as a teenager. His testimony was very disjointed. He returned to religion when his mother became ill with cancer and his worldview changed. He then went on to read the works of ancient philosophers and finally the Bible, of which he professed ignorance until then. Suddenly, he decided Jesus was the Messiah, and ended up at Saddleback Church (Rick Warren‘s home), where he was initially reluctant to enter because he believed they would “preach mythology and take my money.” But then his wife “came to the Lord” and he followed. He read Strobel’s book The Case for Christ, gave up his law practice, and now runs apologist websites.

Both of these former atheists pretty much made the case for their opponents’ arguments. They did not give convincing reasons for their conversions and often stated their previously atheist views more coherently than their apparently current Christian views.

Finally, there was a 10-minute wrap-up on How to Evangelize: Don’t be pushy, be open about your faith, always be prepared to give an answer to atheist arguments, and provide evidence for God’s existence (Wasn’t that supposed to be what this whole session was about? we thought), admit when you don’t know the answer, learn to listen. There was a final word from Craig: Atheists are “so angry,” and there may be legitimate reasons for them to be angry, but they shouldn’t blame God.

At this point the presentation should have been over, but the participants spent another 10 minutes plugging their books. Not unexpected, but what was surprising was that they plugged only their own materials, and didn’t even mention any other books or websites as resources.

A big surprise to all of us who attended was what was not mentioned in this seminar. With the exception of the problem of evil, there was almost no mention of common atheist arguments or how to respond to them. Wasn’t that the point of the whole simulcast?

Overall, it was just a rally for the already-converted and a PR opportunity for the poster-boy of apologetics, William Lane Craig. Other than that, it was an epic failure.

Far from unpacking atheism, it appeared that they didn’t even take the package out of the trunk!