New Survey Talks About the Atheist Influence on the 2012 Elections and Beyond October 23, 2012 Hemant Mehta

The Public Religion Research Institute has just released the 2012 American
Values Survey (PDF) and it focuses on, among other things, how the religiously unaffiliated will shape the upcoming elections (“and beyond”).

It also talks about our changing demographics, the rise of the Nones, and our views on a variety of social issues.

Let’s get to the good stuff:

When it comes to our numbers, nearly a third (32%) of the Millennials (18-29) are religiously unaffiliated, mirroring the results found by the Pew Research Center’s Forum on Religion & Public Life: 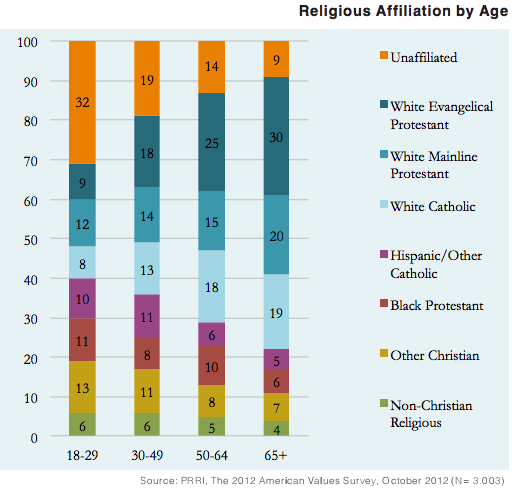 The survey also says that “15% of Americans have left the religious tradition in which they were raised to become religiously unaffiliated.”

But why did we leave our childhood faith? 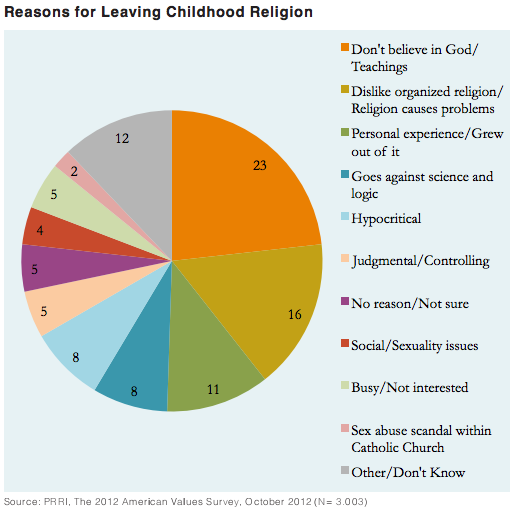 Weird… Christian apologists always say we become atheists because we hate God or just want to sin. But those don’t show up in the list… I guess those Christians are just misinformed. Or liars. Shocking.

Ok, what about the politics?

When it comes to Obama, it turns out that 23% of the people likely to vote for him are religiously unaffiliated, making it the largest single “faith” group supporting him: 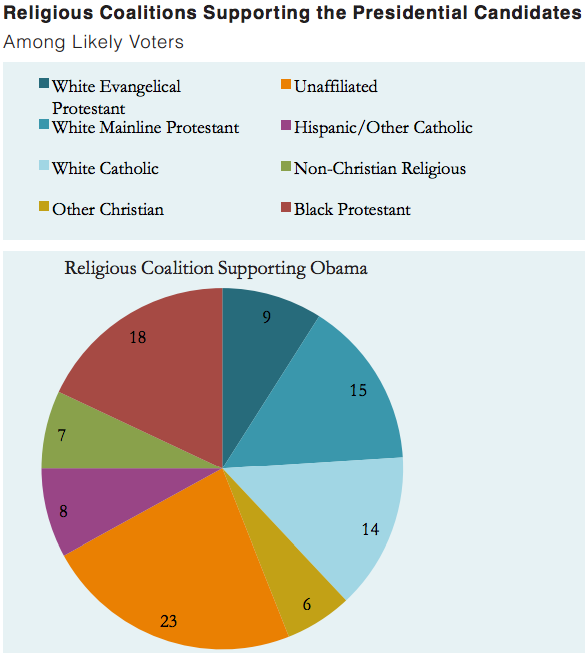 Compare that to Romney’s base, which only has 8% support from the “Nones”: 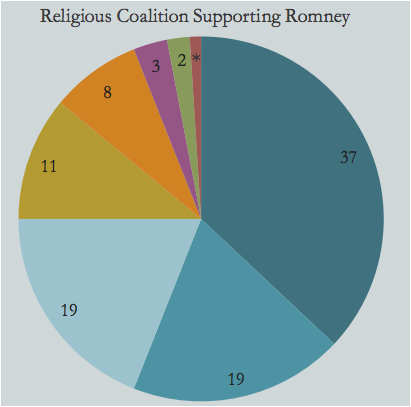 In other words, we may overwhelmingly support Obama, but when it comes to delivering on Election Day, the religious groups have us beaten. They do a better job than we do at getting voters out to support their candidates.

What does that mean for us? Personally, it means all future atheists conferences and events (especially at colleges and high schools) ought to include voter registration drives. We need to make sure atheists are as ready and informed as possible to vote for the better candidate. Sitting on the sidelines does us no good (neither does voting for a third party candidate, I would add, if you’re living in a swing state).

Incidentally, 73% of the Unaffiliated support Obama, while 22% support Romney.

Another piece of interesting information involves the dissection of unaffiliated people into distinct groups: Unattached Believers, Seculars, and Atheists/Agnostics (click image to enlarge):

When it comes to legalizing marijuana, the religiously unaffiliated are on the right side of the issue moreso than any other demographic:

When it comes to marriage equality, atheists and agnostics are obviously in support of it, but the percentage for us is much higher than even that of “secular” Americans and unattached believers:

Nearly three-quarters (74%) of religiously unaffiliated Americans favor same-sex marriage. Within this group, however, there are differences in intensity. Atheists and agnostics (89%) are more likely than secular Americans (70%) and unattached believers (57%) to favor allowing gay and lesbian couples to marry legally.

Overall, the more fervent an atheist or agnostic you are, the more likely you are to support liberal causes. Not really a surprise, but it’s always nice to put numbers to it.

October 22, 2012
Is This Milk Carton An Example Of 'Gay Propaganda'?
Next Post