I knew this day would come but it doesn’t make it any easier to write: Paul Kurtz has died. He was 86 years old. While details are sparse, his son Jonathan Kurtz (President of Prometheus Books) said it happened last night (Saturday, October 20th).

Before the New Atheists went mainstream, it’s arguable that Kurtz did more to spread Humanism and skepticism than anyone else in modern history. If you read books written by Christian apologists prior to the year 2000, their enemy-in-chief wasn’t Sam Harris or Richard Dawkins or Christopher Hitchens. It was Paul Kurtz. They feared him.

His resume is lengthy, but many of his crowning achievements are still making an impact in our community today. What he helped begin, we are all continuing.

He founded Prometheus Books, the first publishing company to print books exclusively for and about the skeptical world. Some of their books include George H. Smith‘s Atheism: The Case Against God and Victor Stenger‘s God: The Failed Hypothesis (the company’s first New York Times bestseller).

Kurtz founded the (currently-named) Committee for Skeptical Inquiry, the Council for Secular Humanism, and the Center for Inquiry, organizations whose missions focus on spreading skepticism, reason, and Humanism.

He was editor-in-chief of Free Inquiry, a magazine that introduced Humanism to many people through bookstores or libraries long before the Internet ever did, and a former editor of The Humanist (a publication of the American Humanist Association). He also helped establish Skeptical Inquirer.

In 1973, Kurtz (with Edwin H. Wilson) wrote the Humanist Manifesto II. an updated version of the 1933 original.

In 2009, Kurtz resigned as chairman emeritus from CFI/CSH/CSI and left his post at Free Inquiry after what the New York Times dubbed a “Lear-like” fall from high. He was frustrated with the direction the organization was taking and he wasn’t quite ready to let go of it entirely. After making a virtually clean break from his past, he began the Institute for Science and Human Values, an organization that never quite took off (perhaps because by that time, we had books/blogs/Internet/alternatives).

Academically, he was a Professor Emeritus of Philosophy at the State University of New York at Buffalo and the author of over 800 articles and 40 books. 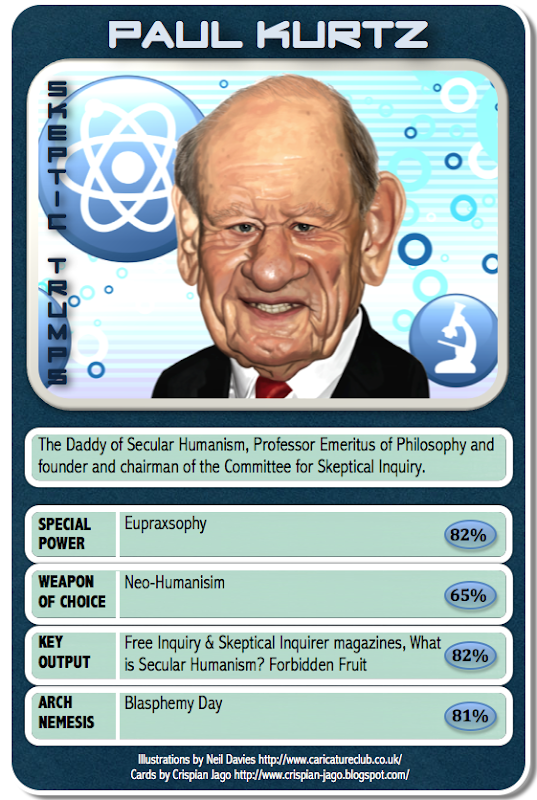 In 2008, Kurtz filmed an episode of The Humanist Perspective and reflected about his life at 80:

His loss is already being mourned by other Humanist leaders:

“Paul Kurtz worked tirelessly for decades to see secular humanism become accepted as an alternative philosophy to traditional religion,” said Roy Speckhardt, the executive director of the American Humanist Association. “The attention and guidance he gave to the humanist movement had an unmistakable global impact.”

“Humanism has been shaped by many people since the beginning of the 20th century, and Paul Kurtz was one of the greatest contributors to the development of our nontheistic philosophy,” Speckhardt said.

… PK was a warm man who genuinely and passionately cared about people, the environment, and humanity. Without PK it is unlikely that there would be anything like the skeptic culture we have today, and without him and his tireless work on skepticism and CSICOP, I wouldn’t be able to make whatever changes and efforts we do through the organization. PK was only one of several prominent CSICOP founders, but he was in many ways the cement that held it together.

From Tom Flynn, editor of Free Inquiry and executive director of the Council for Secular Humanism:

I knew Paul since 1982, when I attended one of the first FREE INQUIRY conferences on Paul’s beloved State University of New York at Buffalo Amherst campus. In short order I was volunteering; in 1989 I joined the staff. In my various assignments in Paul’s nonprofit empire I have been privileged to meet some of the most interesting people in the world and to watch vitally important developments unfold from the inside. With others, I learned much from Paul’s bold vision and his instinctive grasp of how to make organizations grow. Perhaps most of all, I was influenced by his insistence on blending passion for the mission with a commitment to run even nonprofit organizations on sound business principles.

From the Center for Inquiry (Transnational):

Ultimately, Paul Kurtz did much to shape the American and world humanist movements during the final third of the twentieth century. He was a prodigious organizer, responsible for much of the social landscape through which nonreligious Americans moved before the emergence of the so-called New Atheist movement in the middle 2000s. At the same time, a vibrant and varied skeptics’ community now served by dozens of local and national organizations might not exist at all — and surely would not have its current form — if not for Kurtz’s founding of the first modern skeptical organization, CSICOP. His most enduring legacy may be the Center for Inquiry, which continues to stand as the larger movement’s largest, most active, and highest-budgeted organization.

From the Centre For Inquiry Canada:

On a personal note, many of us at CFI Canada had the pleasure of meeting Dr. Kurtz on several occasions, and remember fondly a trip to Amherst following the inauguration of the Toronto chapter in 2006. Dr. Kurtz was surprisingly accessible, taking our branch director for lunch to welcome us to the CFI family. As CFI Canada grew, Dr. Kurtz managed to find time to send messages to us every now and then to congratulate us on our progress, then travelled to Toronto on a number of occasions to graciously speak at our events and conferences. He lived a life that combined a penetrating rationalism and a deep human compassion, a union he felt spoke to the core meaning of humanism.

From Foundation Beyond Belief:

In addition to his intellectual vision, Paul Kurtz was a man of great heart and compassion. When he heard about FBB’s newly launched Humanist Crisis Response program, he immediately endorsed and promoted it through ISHV. “A vital test of any humanist organization’s humanism is its ability to help those in need, which the Foundation is doing so admirably,” he said. It meant a great deal to us to have earned his confidence.

From Steven Novella at SkepticBlog:

We lost two towering figures in the world of rationalism over the weekend. On Saturday October 20, Leon Jaroff died at the age of 85. Then on Sunday October 21 we learned that Paul Kurtz had died at the age of 86. Both men hit their peak prior to the explosion of blogs, podcasts, social media, and as a result, the skeptical community. They therefore might not be that well known to many of the younger skeptics in the community. Their legacy, however, is worth knowing.

I remember meeting Paul Kurtz for the first time. He was very interested in who I was and what I was doing in my local group. He had a clear passion for promoting rationalism. I was also struck, however, by how closely tied secular humanism and skepticism were in his approach…

Regardless of whatever else may be said of him, Paul Kurtz was, in my opinion, the most significant Humanist philosopher of the 20th Century.

From the James Randi Educational Foundation:

Public intellectual, skeptic and magician James Randi, founder of the JREF and a co-founder of the Committee for Skeptical Inquiry, had this to say: “Along with my colleagues in the community of skeptics and rationalists, I will deeply miss Paul and our frequent exchanges over the decades. When our small group met in the 1970s to start the organized skeptics movement, little could we have predicted its worldwide growth. We largely have Paul’s genius to thank for that. We didn’t always see eye-to-eye, but I’ve always admired his vision. This is a sad day.”

“Paul Kurtz was not only my dear friend, but an inspiration,” said D.J. Grothe, president of the JREF and formerly a colleague of Kurtz’ for over a decade. “His humanity, his passion, his creativity and his organizational skills were the bedrock of a number of international organizations, and he worked tirelessly to grow the worldwide skeptics and humanist movements. In this respect, his impact remains unrivaled. His death is deeply felt and he will be sorely missed.”

Shocked at the loss of Paul Kurtz. Greatest secular thinker of the last 60 years. My mentor and friend. Will carry on the mission.

We’ve lost one of our great activists. Rip Paul Kurtz.

Paul Kurtz is dead. A great, if lately troubled, figure in the sceptic and secular humanist worldsbit.ly/RPZiiG

Personally, Kurtz was very kind to me during the time I was an intern at the Center for Inquiry, long before this website started and when I was just getting my feet wet in this movement. I’ve told this story before, but one of my fondest memories of my time there was getting to know Kurtz away from the business side of everything. He took me and another intern out to dinner one night and regaled us with incredible stories. The man coined the term “eupraxsophy” which essentially means living an ethical, exuberant life without a religious worldview, and I was lucky to always see that side of him.

October 21, 2012
Mormon Feminists are Voting for Obama
Next Post