Atheism on the Rise in Ireland October 19, 2012 Hemant Mehta

Atheism on the Rise in Ireland

The Irish Central Statistics Office just released a detailed report (PDF) on the country’s 2011 Census, this on specifically focused on religion.

When it comes to the nation’s non-religious population, everything’s looking amazing.

Take the following graph, for instance, documenting the growth in the number of atheists in each age demographic. The dark purple lines — the ones sticking out at the sides — represent 2011: 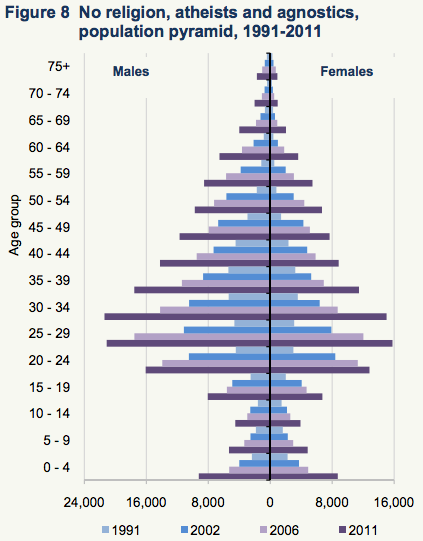 That’s some impressive growth across the board.

And then, there’s this chart, indicating net change for our various labels: 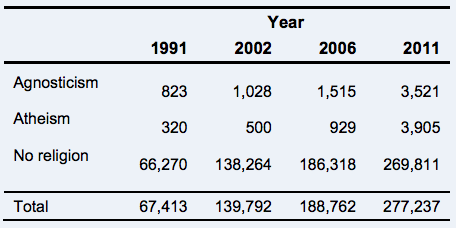 There’s growth for all three categories, but I’m amazed at how popular the “No Religion” tag is compared to atheist or Agnostic.

The sum total of those with no religion, atheists and agnostics increased more than fourfold between 1991 and 2011 to stand at 277,237. The largest proportionate increase was in atheism which has grown from 320 to 3,905 over the twenty years.

Hats off to Atheist Ireland and all the other individuals and groups doing great work to promote reason in the country.