Bosnia is Struggling to Heal Itself October 18, 2012 Mark Turner

Bosnia is Struggling to Heal Itself

I recently returned from a three-week trip around Southeastern Europe, during which I had chance to visit a couple of places I’ve wanted to see for a number of years: Mostar & Sarajevo. My timing couldn’t have been more apt as this week marks the beginning of the defense by former Bosnian Serb leader Radovan Karadzic.

Karadzic is standing trial in the Hague facing 10 charges of genocide and crimes against humanity during the Balkan war in the 1990s. He stands, seemingly defiantly, alongside his former General Ratko Mladic who is also on trial for war crimes and genocide.

So, what does all this have to do with atheism and church-state separation?

As I’ve now seen and heard with my own eyes and ears, the old dividing lines continue to this day. Bosnia is now a much smaller state than the former Yugoslavia, a microcosm of the nation that spawned it. It’s a melting pot of different ethnic groups and political and religious ideologies. It is those religious dividing lines that have contributed so hugely to the war and continue to thwart its path to lasting peace. Many of the key battle grounds of the war remain in Bosnian territory — towns such as Mostar, Sarajevo, and the infamous Srebrenica, site of the murders of thousands of Muslim people in the worst single atrocity in Europe since the end of World War II.

The war was Catholic Croats vs Orthodox Serbs vs Muslim Bosnians, distinctions which remain institutionalized and re-enforced in full twenty years later. It didn’t matter if you were an atheist. If you were a Bosnian, you were Muslim. If you were a Croat, you were Catholic. My guide during my stay in Mostar was of Muslim cultural heritage but was not religious. He’d lost several family members but managed to escape the siege of Mostar. He was granted asylum in Sweden, finally returning just a few years ago. He briefly explained his thoughts to me on how and why he chose to flee when most of his family and friends remained, but it was thoughts of his future that you could tell frustrated him the most.

Bosnia has a public school system free of official religious entanglement, but unofficially it is rife. Children of the same age, at the same stages of their education, are taught in separate classrooms so that they do not have to mix with children outside their ethnic group. There are entire neighbourhoods for Catholics, different ones for Muslims, and so on. It all seemed so familiar to me having grown up watching Northern Ireland struggle to come to terms with its future and try (some might add successfully) to rise above such a partisan culture.

Breaking the cycle of mistrust and barely-concealed hatred is not easy, but surely it must start with the children. The simple act of living, working, and learning alongside someone very different from you breaks down these barriers faster than anything else previously tried.

Sure their parents might remain bitter and intolerant — but at least their children might have a glimmer of hope. This is why religious public education and the division of children on such grounds is a moral outrage. It is bad enough in countries that have peaceful recent histories, but to do so in places such as Bosnia is nothing short of a disgrace.

October 18, 2012
Mr. Deity on Why Creationism is Appropriate for Children
Next Post 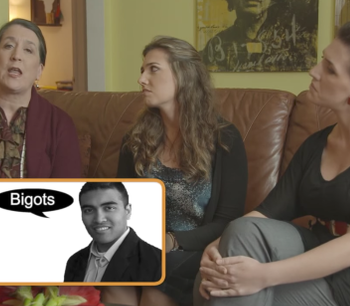