Dinesh D’Souza Responds to Allegations of Infidelity With… Um… What? October 17, 2012 Hemant Mehta

Dinesh D’Souza Responds to Allegations of Infidelity With… Um… What?

Conservative Christian Dinesh D’Souza is already under fire from his base for possibly engaging in an affair while still technically married, according to an article in World Magazine. 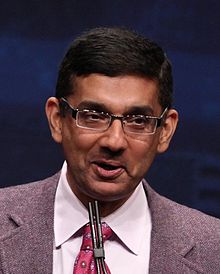 He just gave an interview to Christianity Today (CT) regarding the gossip… and he’s really not helping his case with soundbytes like this:

… “I’m a college president at King’s and a public figure as a Christian apologist, and I thought it very important that any woman I appear with have a legitimate relationship with me.”

When CT asked D’Souza directly for his response to charges of infidelity, he responded: “It’s absolutely not the case, um, that, um, that, um, um, you know, it’s…. Look, the issue here is that World is attributing to me an admission that I never made — is attributing to me a quotation that I never said. That to me is the problem… They are just claiming based upon my non-assertion that I did something that I didn’t do.”

Way to deny the charges, Dinesh.

He also says that he didn’t realize being engaged while married to someone else would be looked down upon by other Christians, which I find very hard to believe.

***Update***: D’Souza, on his personal website, blames the whole scandal not on his personal actions but on the staffers at World, who clearly just want to get their revenge on him (see #5).

I’ll reiterate what I said before: I don’t think this should be any of our business. This should be between him and his binder of women.

But when D’Souza speaks out against same-sex marriage because that ruins the “sanctity of marriage,” his own relationships become a fair target for scrutiny.

October 17, 2012
In Pennsylvania, It's Now 'Prayer Month' During the 'Year of the Bible'
Next Post

October 18, 2012 Fundamentalist Christians and Anti-Vaxxers: A Toxic Combination
Browse Our Archives
What Are Your Thoughts?leave a comment