A district in my area did something really amazing earlier this week. On Monday, the East Aurora Board of Education voted — unanimously — to make things better for transgender students:

The new policy specifically states that transgendered and gender nonconforming students have the right use the restroom that corresponds to their gender-related identity that is consistently asserted at school. The student has the right to be addressed by the name they want to be called, too.

“A court-ordered name or gender change is not required, and the student needs not change his or her official records,” the policy states.

“In no case shall a transgender student be required to use a locker room that conflicts with the student’s gender-related identity,” the policy reads.

Many school districts have taken steps to be more inclusive of the LGBT community (like allowing students to take same-sex dates to a dance), but even the good ones often ignore the “T” in that acronym. This is a wonderful step toward making things better for all students, not just the ones who conform to the gender they were born with. (For what it’s worth, the policy is in accordance with Illinois law, so it’s not like this is some activist school board.) 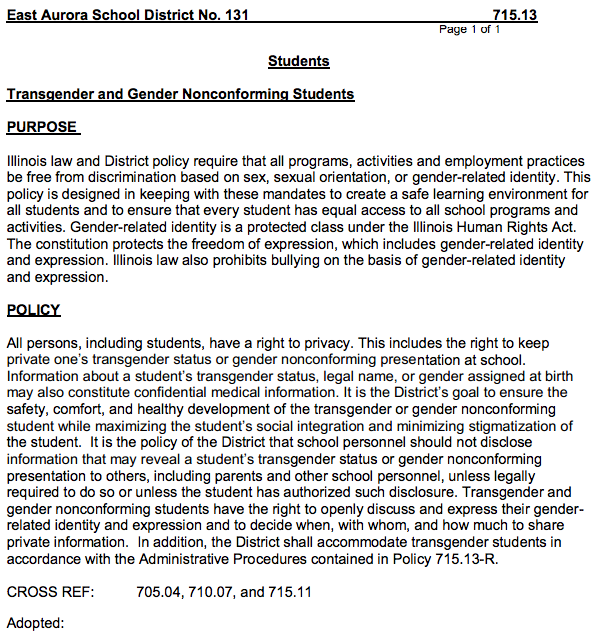 Doesn’t seem like a big deal at all… so, as you might expect, the conservative Christian group Illinois Family Institute is freaking out, urging parents to pull their kids out of the public school district before, I don’t know, the transgender kids smile and ruin Jesus for everybody?

The school board is now imposing non-objective, “progressive” moral, philosophical, and political beliefs — not facts — about gender confusion on the entire school. This feckless school board has made a decision to accommodate, not the needs of gender-confused teens, but their disordered desires and the desires of gender/sexuality anarchists who exploit public education for their perverse ends.

Gender confusion affects approximately .003 percent of males and .0001 percent of females. Aurora East High School is now accommodating the disordered impulses and unproven beliefs of a statistically miniscule segment of their population and in so doing ignores the beliefs of the majority. Some would argue that this policy also reflects a gross distortion of compassion and profound ignorance about what truly helps the few students who suffer from gender dysphoria or Gender Identity Disorder.

According to IFI’s Laurie Higgins, what would “help” transgender students is following the rules dictated by their genitalia, no matter how dehumanizing that is to those students.

This new policy will allow transgender and gender-nonconforming students to use the restroom or locker room that’s right for them, to join the appropriate sports team, and to be called by their teachers what they want to be called. It’s not asking for much.

But you can understand IFI’s paranoia at any policy that goes against their narrow-minded view of the world and the diversity of the people who live in it:

This is a biased, radical, and offensive school board decision that all Illinois taxpayers — especially Aurora community members with or without children in school — should vigorously and tenaciously oppose.

Or, better yet, you can send the school board members an email thanking them for doing the right thing.