If the Tables Were Turned on the Anti-Gay Bigots… October 16, 2012 Hemant Mehta

If the Tables Were Turned on the Anti-Gay Bigots…

This is a few years old but it’s absolutely brilliant. Jim Burroway at Box Turtle Bulletin wrote a pamphlet exposing the myths of the “Heterosexual Agenda” (PDF).

Using the same kind of rhetoric and fact-manipulation that the Religious Right groups do, Burroway writes about the evils of heterosexuality: 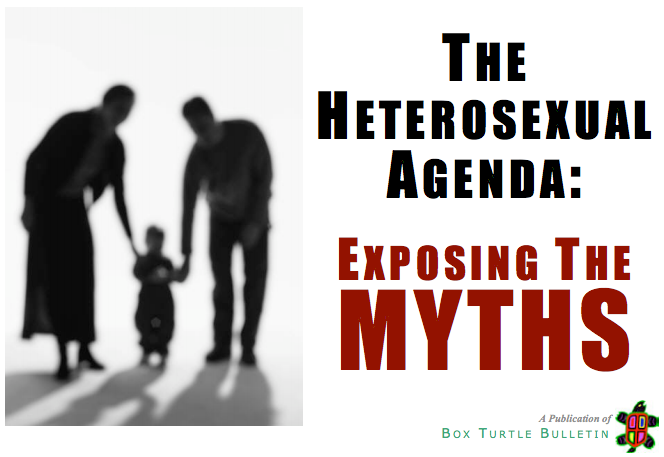 Heterosexuality is becoming increasingly more difficult to ignore. It is being forced upon us through legislation, taught to our children in school and promoted in the powerful arts/entertainment complex. If it is true that heterosexuality has the destructive effects on the individual and society that many believe, then it behooves us to know our enemy and forestall any further advance of heterosexuality by understanding what it is, what the heterosexual community is up to, and how to answer their arguments in the open marketplace of ideas.

Heterosexuals are clearly obsessed with sex. It’s the only thing separating them from everyone else. They single-handedly invented the sexual revolution with the introduction of “the pill,” and heterosexual promiscuity has become the hallmark of that sex-obsessed lifestyle ever since.

The best part is at the end when Burroway explains each citation he used, where it came from, and how he manipulated it to suit his needs (if necessary). Finally, he offers his own suggestions for how to write you own anti-anti-gay pamphlet:

October 16, 2012
Dinesh D'Souza, Who Opposes Gay Marriage, is Divorcing His Wife for a Younger Woman
Next Post

October 17, 2012 Someone's In Denial About the SpaceJump
Browse Our Archives
What Are Your Thoughts?leave a comment