Late last year, the Secular Coalition for America put out a scorecard for the major party presidential candidates. There were more Fs floating around than you would hear from sailors at the DMV (though Jon Hunstman didn’t fare too badly): 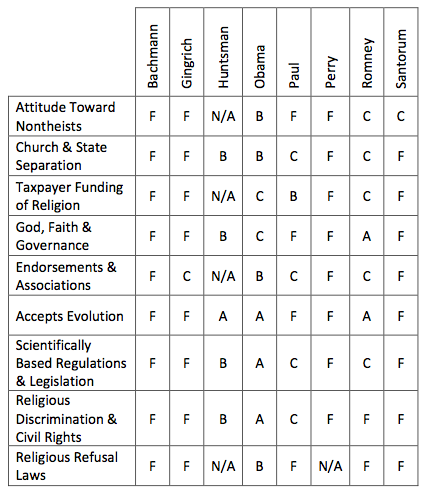 … the Secular Coalition for America presents the 2012 Presidential Election Scorecard which scores the positions of the candidates for the office of President of the United States in five areas and on 17 specific issues. The candidates who appear on the Secular Coalition for America’s scorecard are those who appear on the ballot in enough states to amass the required 270 electoral votes to be elected President of the United States. 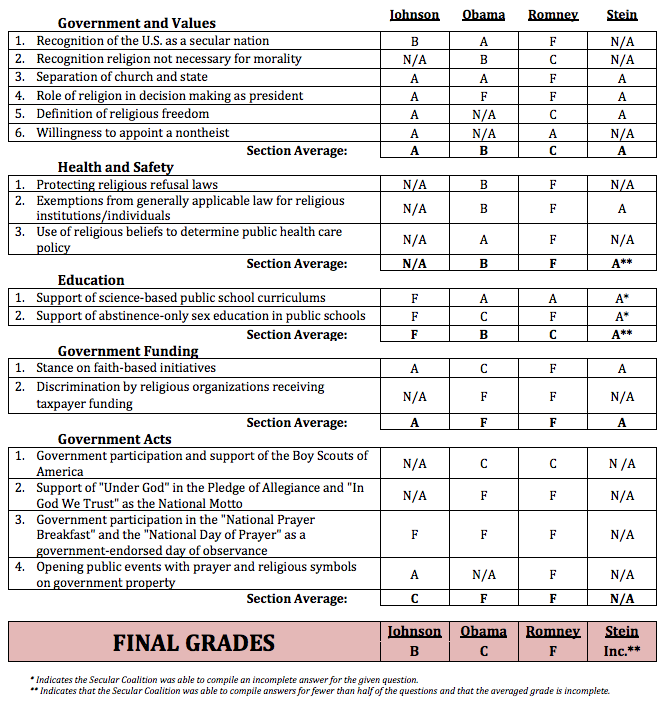 Johnson gets a B, Obama a C, Romney an F, and Stein an Incomplete.

In all three areas where Romney and Obama differ the most, Obama comes away with As while Romney gets Fs: Recognition of the U.S. as a secular nation, Separation of church and state, and Use of religious beliefs to determine public health care policy.

The only areas where Romney gets a grade higher than a C are his willingness to appoint a nontheist (to his cabinet) and his support of science-based public school curriculums.

What do I take away from this?

Jill Stein would be a great candidate… if there was any real hope of her winning. But, just like Johnson, there isn’t.

If you’re a Secular American who cares about separation of church and state and keeping religion out of politics, Romney shouldn’t even be in your radar.

Obama doesn’t come away as very impressive, but if you believe (like I do) that he’s mostly using religion as a tool for pandering to the masses, then he’s the obvious choice. I’m still disappointed in the way he pushes religion over non-religion in things like the faith-based initiatives (allowing religious groups to discriminate in their hiring), but that’s a fight we can continue to have in his next term.