New Report: ‘A Third of Adults Under 30 Have No Religious Affiliation’ October 9, 2012 Hemant Mehta

New Report: ‘A Third of Adults Under 30 Have No Religious Affiliation’

According to a report released today (PDF) by the Pew Research Center’s Forum on Religion & Public Life (in conjunction with PBS’ Religion & Ethics NewsWeekly), the Nones are on the rise — again. More people are atheist, agnostic, or unaffiliated with religion than ever before. (In fact, 46,000,000 Americans are religiously unaffiliated, by Pew’s count.) 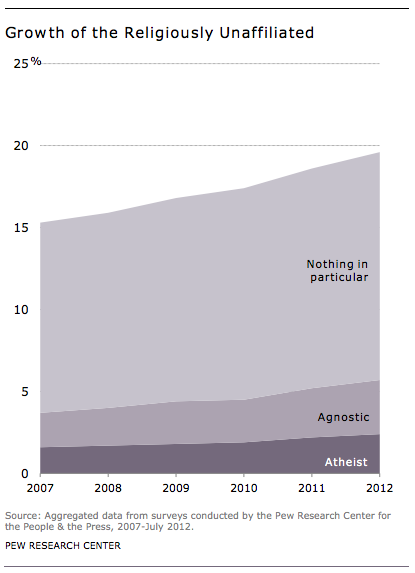 Here’s what the headline should be, though:

A third of adults under 30 have no religious affiliation (32%), compared with just one-in-ten who are 65 and older (9%). And young adults today are much more likely to be unaffiliated than previous generations were at a similar stage in their lives. 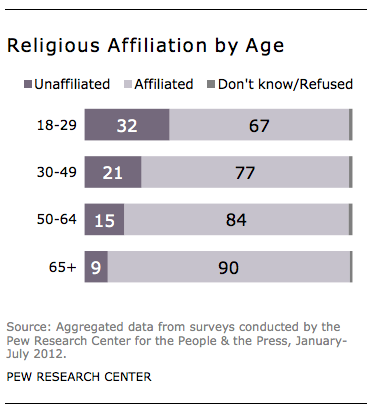 A THIRD! It’s never been higher than a quarter before. That’s incredible.

Not only are we increasing in percentages across the board (in red, below), the percent of adherents to major religious faiths are in decline (in blue):

Compared to five years ago, there are more male, female, white, black, educated, rich, poor, and single religiously unaffiliated people. We’re also spreading throughout the country, not just in one particular religion:

In the 2008 presidential election, they voted as heavily for Barack Obama as white evangelical Protestants did for John McCain. More than six-in-ten religiously unaffiliated registered voters are Democrats (39%) or lean toward the Democratic Party (24%). They are about twice as likely to describe themselves as political liberals than as conservatives, and solid majorities support legal abortion (72%) and same-sex marriage (73%). In the last five years, the unaffiliated have risen from 17% to 24% of all registered voters who are Democrats or lean Democratic.

Our friend Jesse Galef of the Secular Student Alliance was thrilled about that one:

Pew’s numbers were met with elation among atheist and secular leaders. Jesse Galef, communications director for the Secular Student Alliance, said that the growth of the unaffiliated should translate into greater political representation for secular interests.

“We would love to see the political leaders lead on this issue, but we are perfectly content with them following these demographic trends, following the voters,” Galef said.

“As more of the voters are unaffiliated and identifying as atheist and agnostics, I think the politicians will follow that for votes.

“We won’t be dismissed or ignored anymore,” Galef said.

So, here’s the big question: Why is this happening?

… young adults, in particular, have turned away from organized religion because they perceive it as deeply entangled with conservative politics and do not want to have any association with it.

Aggregated data from Pew Research Center polls [shows] that among adults under 30, married people are more likely to have a religious affiliation than are unmarried people.

… some observers contend [that there] has been a general decline in “social capital” — a tendency among Americans to live more separate lives and engage in fewer communal activities, famously summed up by Harvard’s Putnam as “bowling alone.” In this view, the growth of the religious “nones” is just one manifestation of much broader social disengagement.

… societies in which people feel constant threats to their health and well-being are more religious, while religious beliefs and practices tend to be less strong in places where “existential security” is greater. In this view, gradual secularization is to be expected in a generally healthy, wealthy, orderly society

I would argue #1 is the most plausible of those theories… but I’m surprised there’s no mention at all of the Internet. That’s a religion destroyer as much as anything else we’ve ever seen — open access to information, the ability to prove your pastors wrong, the overwhelming number of atheists who make their case online… how is that not a force to be reckoned with?

Anyway, here’s the kicker to the religion: 88% of Americans surveyed said they are “not looking for a religion.”

As with any survey, there are some weird results in the mix of all the awesome…

… like that. 24% of self-proclaimed atheists/agnostics are “absolutely certain” or “fairly certain” there’s a God or a “universal spirit.” What?! This word “atheist”… I do not think you know what it means…

I would prefer separating God from the more loosely-defined “universal spirit,” but the idea that there’s anything supernatural out there at all should be anathema to all non-religious people. Those numbers should be 0% across the board. It just goes to show: Being an atheist isn’t the same as being completely rational. We might use the same labels but how we interpret them is far from universal.

Finally, just to feed the stereotypes, the survey shows that the Nones are the least likely to want to be part of a shared community: 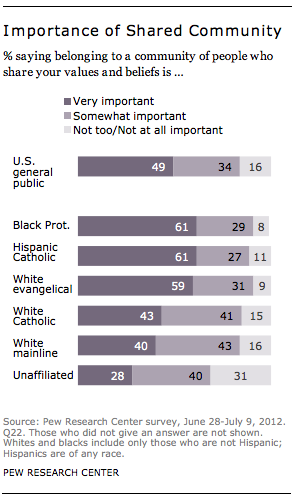 There will be a lot of analysis of these results over the next few days, but here’s the one-sentence summary: This is good news for the non-religious. Our numbers are growing. I doubt we’ve hit the plateau yet.

But these results won’t mean anything unless we can find a way to harness these numbers and use them to achieve our political goals (like equal rights for all people and church/state separation). That has always been the case, but rarely have the numbers been handed to us on a silver platter like this.

***Update***: The American Humanist Association is (obviously) pleased with the findings:

“Millions of Americans are discovering that religion isn’t required in order to lead a moral and purposeful life,” said Roy Speckhardt, executive director of the American Humanist Association.

Traditional religions may be unwittingly accelerating the secularization. Speckhardt explained, “We’re seeing evidence that our numbers are bolstered when there’s religious opposition to progress on issues like same-sex marriage, women’s reproductive freedom, and concern for the environment. Young people especially can’t stomach such backward thinking.”

***Update 2***: American Atheists is “jubilant” according to a press release:

David Silverman, President of American Atheists said, “Each year the statistics show that our country is becoming more and more non-religious. One in five Americans are non-religious overall. Yet one in three people in the 18-29 year old demographic are non-religious. These young people are the future leaders of our nation. It’s exciting to know that these men and women will lead us into a more secular, and balanced future.”

***Update 3***: The Center for Inquiry says the report “holds promise for the future“:

“Though the ‘unaffiliated’ are not entirely made up of nonbelievers, the fact that one in five Americans have rejected traditional religion means that the enormous influence religion has had over policy and culture will continue to wane,” said Ronald A. Lindsay, President and CEO of the Center for Inquiry. “Furthermore, thanks to the high percentage of ‘nones’ among the younger generations, these numbers tell us that we are closer than ever to realizing a society in which religious dogma has no significant influence on public policy — that is, a society based on reason and science rather than myth and superstition.”

***Update 4***: The Secular Coalition for America is enthusiastic about the news:

“The study indicates that not only are the religiously unaffiliated an ever growing community within the country as a whole, but that we have the potential to hold a lot of political clout,” said Edwina Rogers, Executive Director of the Secular Coalition for America. “The findings lend credence to the growth of the secular movement that we have seen on the whole and the strides we are making in every state across the country.”

October 9, 2012 Fewer Than Half of Americans Are Protestants
Browse Our Archives
What Are Your Thoughts?leave a comment