Thousands of Years of Religious Slaughter in One Cartoon October 8, 2012 Paul Fidalgo

Thousands of Years of Religious Slaughter in One Cartoon

You know what’s hilarious? The idea that for millennia, various religious and ethnic factions have slaughtered each other over the right to claim a small strip of arid land in the Middle East because they think God wants them to have it. I mean, come on, that’s a hoot.

You know what’s even more hilarious? When that centuries-old cycle of violence, fanaticism, imperialism, and madness is depicted in cartoon form.

Oh, and to make it just unbearably funny, you throw in a song with lyrics by Pat Boone.

I give you Nina Paley‘s This Land is Mine. 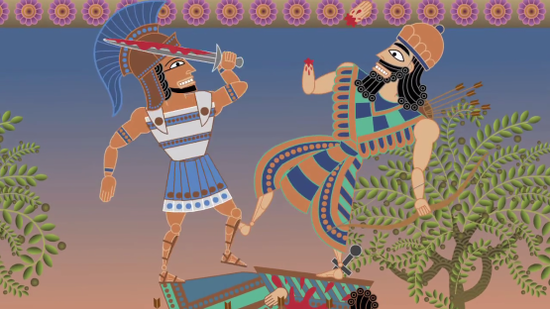 Paley — who also created the wonderful Sita Sings the Blues — gives some of the background on this video, and a larger potential project called Seder-Masochism, here.

October 8, 2012
A Better Debate Than We'll See All Month
Next Post