Why Aren’t the Democrats Reaching Out to Secular Americans? October 6, 2012 Hemant Mehta

Why Aren’t the Democrats Reaching Out to Secular Americans?

Two charts stand out from the Public Religion Research Institute’s latest report (PDF) about the Millennial generation (ages 18-25) and their voting habits. And while the media coverage of the report focuses mostly on the race issues, the religious aspects of it are fascinating in their own right.

The first chart isn’t surprising at all until you consider the implications of it: 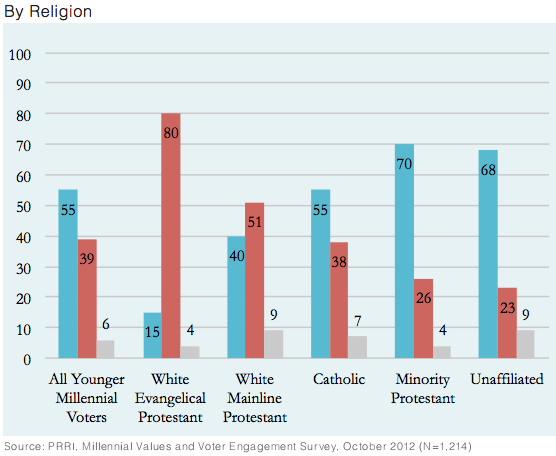 It shows that the religiously “Unaffiliated” (atheists, agnostics, those who are religious but don’t use any religious label, etc.) overwhelmingly support President Obama while white evangelical Christians are supporting Mitt Romney.

What stuns me is that, while Republicans have always reached out to Christians, the Democrats are doing next to nothing to court the votes of Secular Americans. They still consider us politically toxic. The GOP isn’t interested in our votes, so the Democrats would be doing themselves a favor by talking to us, courting us, and taking our issues seriously. When they don’t, we may not vote Republican, but we may end up not voting at all or voting for a third party candidate.

That’s a wasted opportunity on their end, especially when you consider how quickly our numbers are rising and how — let’s face it — we don’t really have any other realistic option.

The second chart surprises me a little more. This one talks about how comfortable Millennials are voting for candidates with certain religious backgrounds: 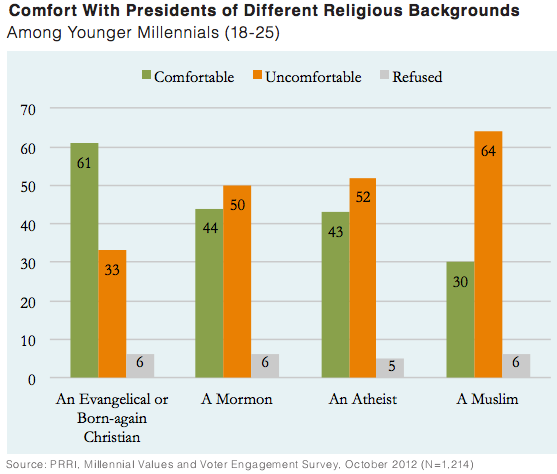 We’re currently rated at the same comfort level as Mormons and (unfortunately) far better than Muslims, who are most likely unpopular due to misguided stereotypes about them and not their actual beliefs.

Sarah Posner has a few additional notes on the numbers behind this report.