For the past several years, New Humanist magazine has been handing out the Bad Faith Award. 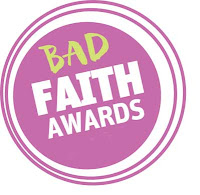 The award goes to “the person who has made the year’s most outstanding contribution to talking unadulterated (and often destructive) nonsense about matters of religion.”

Who should be nominated this year? Let them know!

Maybe the entire Republican Party should just be given a lifetime achievement award before they sweep this thing.

October 4, 2012
A Documentary About Anti-Caste System Activists in India
Next Post