My Day at the ‘America for Jesus’ Rally October 1, 2012 Hemant Mehta

My Day at the ‘America for Jesus’ Rally

This is a guest post by Shaun Patrick McGonigal. He blogs about atheism, polyamory, and skepticism at polyskeptic.com.

The only way we are going to transform this nation is by transforming individuals, by bringing them to Christ.

This may not be an exact quote from the America For Jesus event in Philadelphia this past Saturday, but it was as close as I could transcribe after getting my notebook out upon hearing it booming over the speakers to the large crowd in Independence Mall. 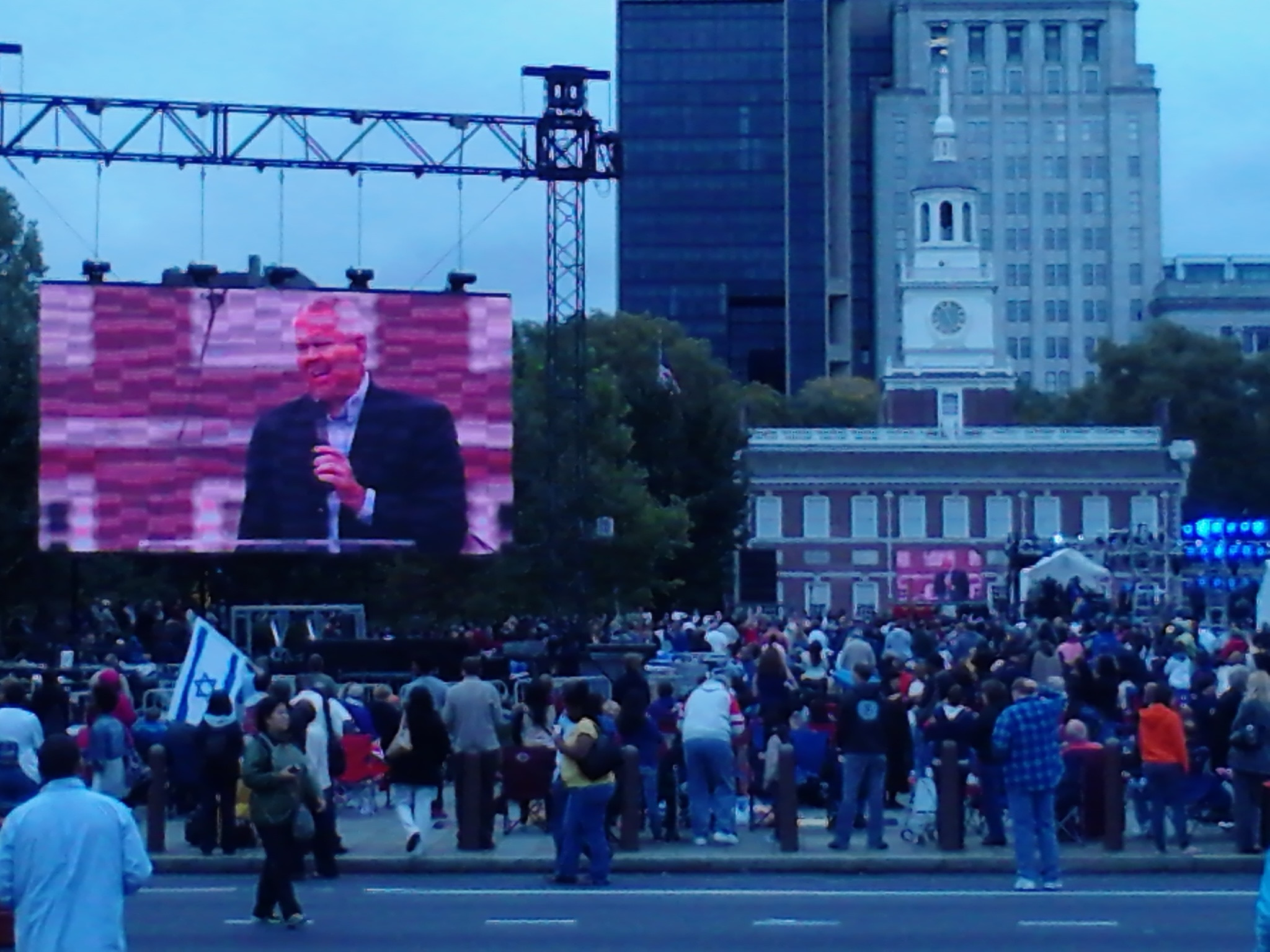 It was a message which would be repeated several times over the course of my time at the event: We will never change America through politics. No. For that, we will need the “Holy Spirit.”

For those of you uninitiated in Jesus-speak, that means God, or at least one of God’s personalities. But whether we call the big guy God, Jesus, or the Holy Spirit, I heard it referred to many times while I was there, and I found much of it troubling. 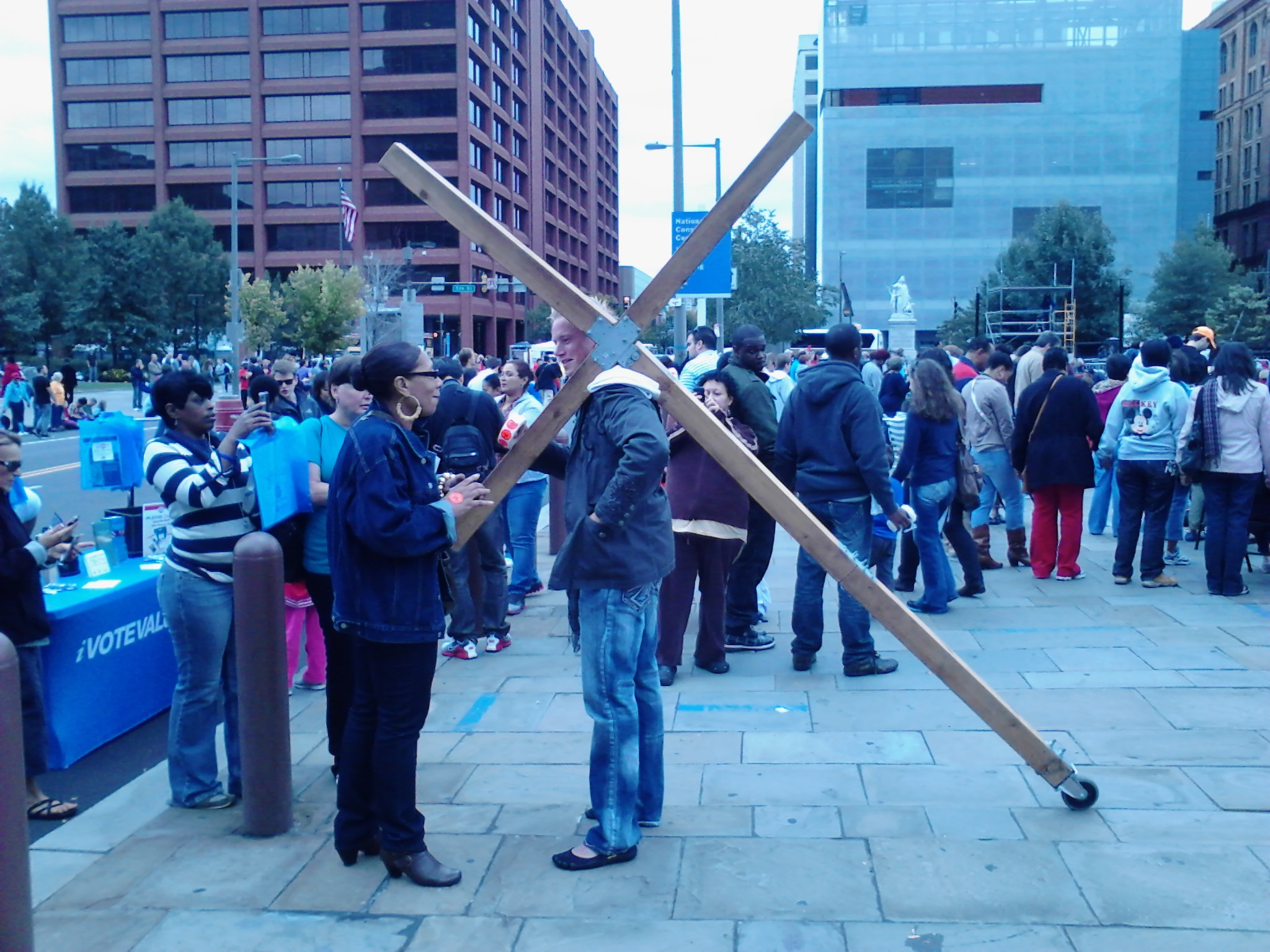 I have been to a few Jesus-centered events over the past several years. In 2006, I attended Battle Cry, which was about as Religious Right as you could get with its militaristic feel, video speech by George W. Bush, and Ron Luce shamelessly asking for people to give until it hurt. Since then, I have visited a few churches and attended a class in Calvinist Theology. Today’s event was reminiscent of Battle Cry, but it was also very much like a music festival.

If any of you have been to the kind of church service that utilizes emotionally-saturated chords behind emotionally-pregnant words, you will recognize what being there sounded, looked, and felt like. I’ve never believed in any gods and I’ve never regularly attended church, but I found myself drawn in by the intensity of the words and the soaring music, compelling the listener to either swim with or against the rising tide of chords and voices.

At one point, while jotting down some of the above reflections, a man approached me, tapped me on the shoulder, and greeted me with a smile. He had seen my button (“your friendly neighborhood atheist”) and wanted to talk with me about what I thought about all of this. He talked about the fact that there was a plurality of political perspectives there and that the politics was kept at bay. He thought that this was no mere Religious Right gathering and even knew enough to mention the name Barry Goldwater, whose unsuccessful presidential bid in 1964 was a watershed moment in the relationship between the Religious Right and the GOP, when I mentioned how the Religious Right had been effecting politics since the 1960s.

To be fair, there were noted concerns about social justice, racism, and poverty in more than a few of the speeches They never went so far as to include LGBT rights, but this was no Tea Party event even if there were identifiable elements of that as well. The crowd itself was fairly diverse, even including the voices of black churches. In light of the circumstances of the upcoming election, this could be read as political in nature, but perhaps that is too cynical. I was not able to talk to any of the organizers to ask such a question, in any case, and I doubt I would have gotten a straight answer had I been able to do so. 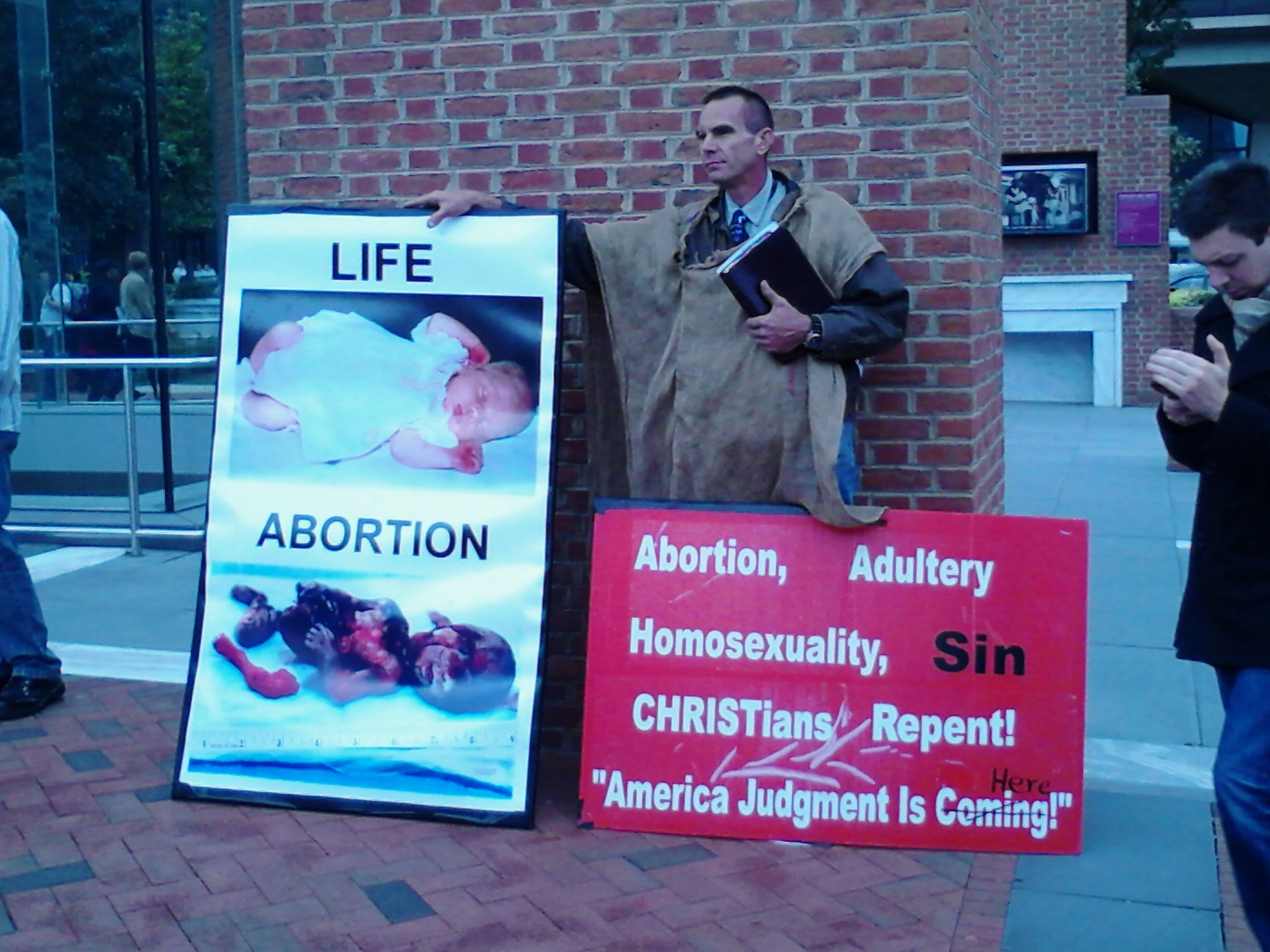 At one point, a black pastor, who was addressing “the haves and the have-nots” said that we (well, maybe not me) needed to “reclaim the sign of the rainbow” and create a “rainbow coalition” in order to bring all people to Christianity. While he did not overtly mention LGBT communities, the rhetoric was to reclaim the symbol which has become associated with gay rights into a symbol of a form of Christian racial harmony. Under such a symbol, he suggested, we could create economic engines and business opportunities in the ghettos of urban America. We needed to be Christians first and black/white/etc second as we built up an America under God.

This was the overwhelming theme of the day: America belonged to Jesus. There were prayers for representatives, judges, and presidents to rule under God. There was a call for God to bring leaders, in the upcoming election, who would rule under His will. I cannot tell you how many times I heard speakers shout “one nation under God.”

There was no place for atheists here, with this crowd. The only time I remember hearing the word “atheist” the entire day was when Pat Robertson came to the stage to speak and said that he didn’t care what atheists told them, this land belonged to Jesus! There wasn’t even an attempt to hide the dispensing of secularism here — which, for anyone familiar with Robertson, was not a surprise. 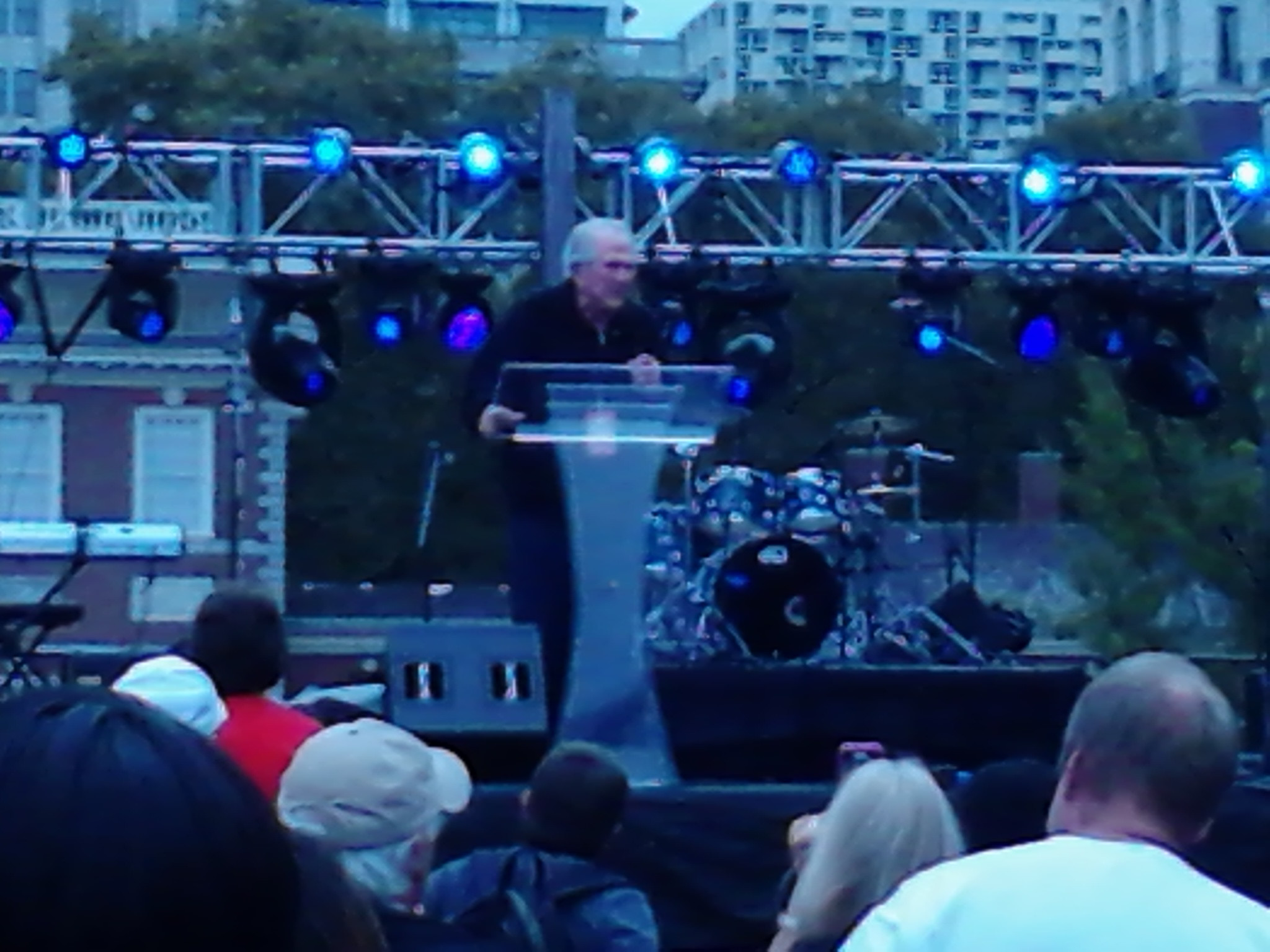 This is the largest problem with events such as this, as well as the worldview it perpetuates and reflects. The über-patriotic, Christian Nation-esque rhetoric associates the greatness of America, including the Constitution and the Declaration of Independence, with their form of Christianity. It is a worldview that is myopic and excludes the rest of America, especially those of us who are atheists/humanists/secularists.

They know that atheists, Muslims, Jews, and many other belief systems exist in America, but America is not for them; America is for Jesus. So no matter how nice they were (and most of them were very nice) and no matter how much they gave lip service to religious freedom, they still held a view tying American history to Christian mythology, putting Jesus above everything else.

It is a view which is incompatible with secularism. It is not the secular America that I see and fight for. It is a theocratic America which is now bleeding into the mainstream churches all over America. Therefore, I think that my friend who tapped me on the shoulder was wrong; this event was politically partisan in nature and it leaned conservative. Despite the inclusion of black churches and the attempts at showcasing diversity, it was a crowd with one mindset. Even the mentions of social justice were delivered almost exclusively by representatives of those various black churches and still failed to include those of us who didn’t hold their conservative views on sexuality, marriage equality, and inclusiveness. There were no Al Sharptons, no liberal Christian messages to balance out the conservatism and theocratic rhetoric. 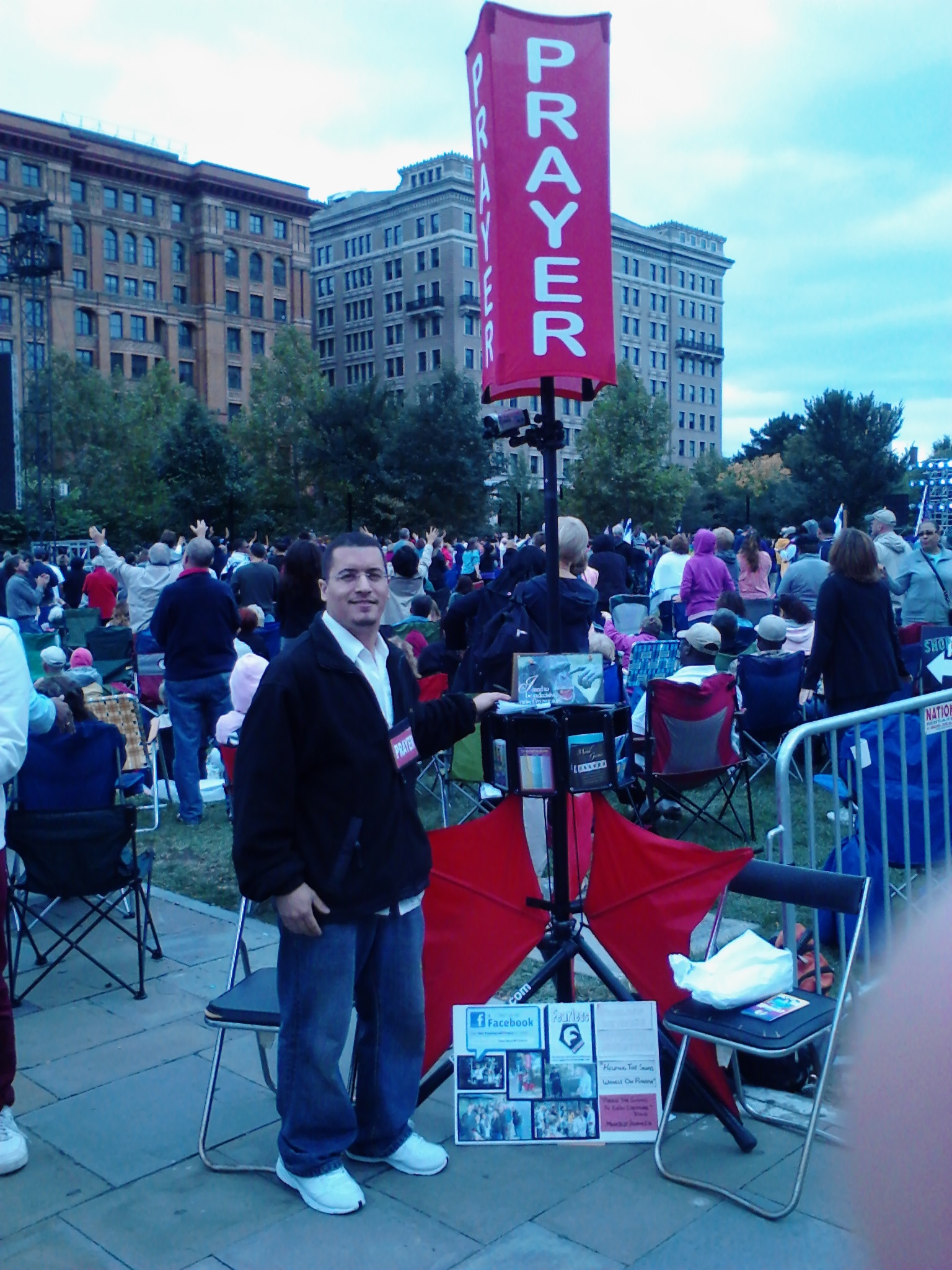 “Those who will not be ruled by God will be ruled by tyrants,” said one speaker, bypassing the idea that creating such a dichotomy between Christianity and tyranny meant ignoring the tyranny of Yahweh.

“This land belongs to God Almighty,” said Pat Robertson as I stood 20 feet away from him. “We will never change America through politics.” This was, perhaps, the most political set of declarations I heard all day. In the same way that many Christians claim to reject religion in accepting Jesus, Pat Robertson and the many who spoke before and after him rejected politics while shouting political messages about the Christian-ness of America.

In summary, everyone I talked to was very friendly, interested in what I had to say, and very welcoming. But the fact that these people could not see the obvious political nature of this gathering was scary to me. It was a litmus test, of sorts, of where the mainstream and conservative churches are right now and how they view the world. They do not accept real science, they tend towards biblical literalism, and they have a view of the world which looks very different from the one I see. Furthermore, their friendliness seemed to be limited to the interpersonal and stopped at the point of applause-inducing messages of exclusivity. They saw America, and the world, as being under their God, and they didn’t see a real place for the rest of us. 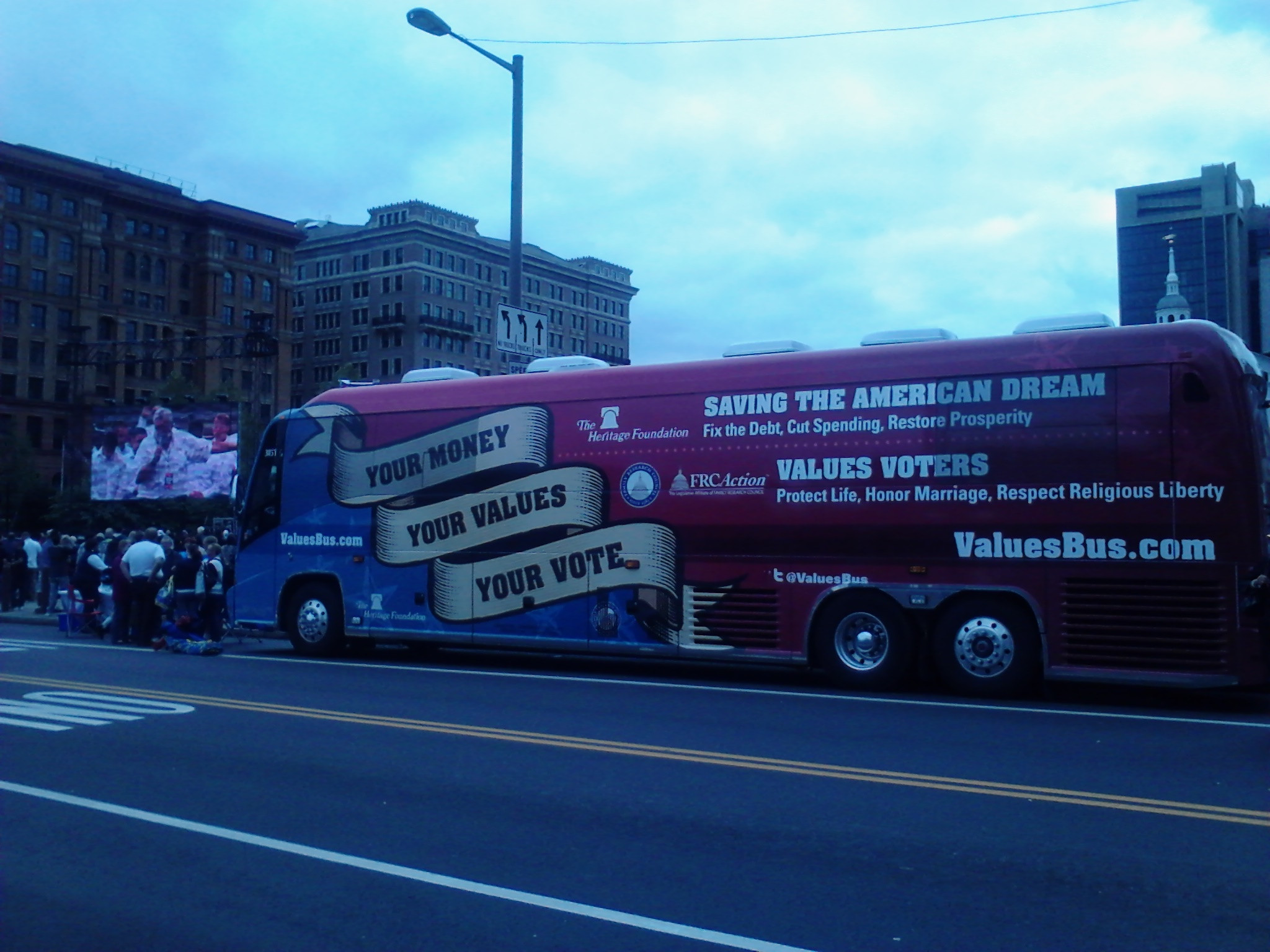 It’s one thing to be friendly to my face and tell me that I am welcome and that my place in society needs to be protected. It’s another to imply the exact opposite through your rhetoric. Based on the speeches I heard and everything I saw, my “place” and the place of all atheists and other non-Christians in “Christian America” was secondary to theirs.

We still have a lot of work to do.