Last Thursday night, the Campus, Atheists, Skeptics and Humanists at the University of Minnesota drew chalk images of Muhammad on campus to “celebrate” Everybody Draw Muhammad Day.

These weren’t mean images. Many were stick figures. Some simply alluded to Muhammad indirectly: 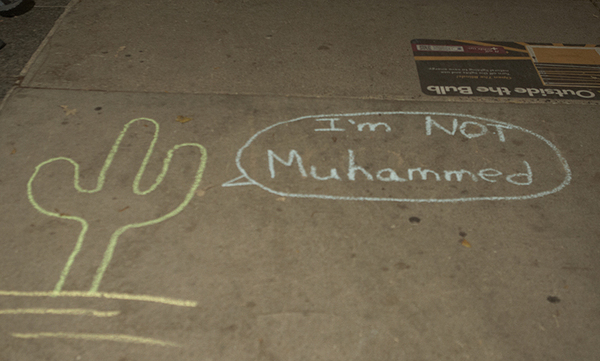 Still, it didn’t stop the Muslim Student Association on campus from getting upset about it and it didn’t stop certain students from defacing the drawings:

The event was sparked by past violent responses to depictions of the prophet and the recent anti-Islam movie, [CASH co-chair Christopher] Nolting said.

“Everyone has the right to be offended, but you can’t go out and act violently in some way,” he said. “You shouldn’t fear for your life just from a drawing.”

By Friday morning the drawings were defaced or completely erased by people who found the depictions offensive.

“It’s almost like they were doing this to provoke us,” said mathematics junior Azhar Abdusebur, president of the group. “Giving them a reaction was what they wanted, so we chose to ignore the whole situation.”

YES! That’s the right response! Ignore the drawings and move on.

The whole notion of drawing Muhammad starting because a group of Muslim radicals killed or issued death threats against people who did it. And far too many moderates responded by blaming the artists.

In fact, the article in the Minnesota Daily quotes members of the Muslim student group — and not a single person says anything close to, “This isn’t something I would do, but I support the atheists’ right to do this. I believe in the value of free speech.”

“If we did anything it would just add fuel to the fire,” [Omar] Alamy said. “We’d rather educate everyone on how to react to something like this.”

“As a Muslim that is the most offensive term you can say, and they know that,” said physiology junior Warda Odhowa, vice president of MSA. “But they did it anyway… they did it.”

They did it because you still haven’t figured out how to deal with it. It’s simple. Just say you support their right to insult your faith. Say that any violence or anger directed at the artists is absolutely uncalled for, even if the drawings are blasphemous or designed to offend.

When that happens everywhere, these drawings will stop.

By the way, it’s not just Muslim students who were angry about these drawings. Rev. Doug Donley, chair of Interfaith Campus Coalition, spoke out against it, too:

I was saddened to see sidewalk chalk encouraging people to draw pictures of Mohammed. In a university community, we ought to use our best energy to foster dialogue and knowledge about deeply held beliefs. Reducing religion to a caricature does little to move us in that direction. In fact, it does the exact opposite. While I respect people’s rights to free speech, I encourage people to not engage in acts designed to harm or insult our fellow students and community members.

Donley doesn’t get that this event was intended to create dialogue. He also makes the mistake of assuming that drawings mocking a bad religious idea is not the equivalent of insulting human beings who deserve respect.

Another non-Muslim student spoke out as well:

Even though I am not of the Islamic faith, I am angered by this event. CASH is inviting the unrest that is currently rocking the Middle East to our campus by purposefully seeking to offend. While members of CASH are protected by freedom of speech in this expression of their views, I urge them and everybody else who plans on participating to find a more peaceful way to demonstrate their opinions. How can we have an inclusive campus if we, as students, allow intentionally inflammatory events such as this to persist?

Josh Brose, the Activities Director of CASH, replied to the statements in a public email:

As the C.A.S.H activities director I think it’s important to respond to these kinds of calls for peace and tolerance because they are very appropriate and well-intentioned. However, these comments are at odds with what is really happening. Campus Atheists Skeptics and Humanists did not invite any unrest — nor does our group seek to offend. We had very specific goals for this event and none of them were to generate offense or disrespect. Blaming unrest in the Middle East on people who draw innocuous drawings with chalk is obscene. We are not out to cause religious conflict but to stop it — by showing people that they do not have to follow other people’s religious dogma out of fear. As a society we need to put the blame where it belongs — on the people who encourage and commit crimes and acts of violence.

As a group we strive to be inclusive and respectful of all people. We also strive to be unrelenting in the search for truth. We do not believe that these goals are in conflict, and we welcome all people with similar goals to our meetings and events. We are not simpleminded religion haters — We are a diverse group of people who seek to improve the future through BOTH serious activism and gentle dialogue with other groups and individuals.

In the meantime, if you’d like to see this site’s compilations of drawings of Muhammad, you can go here and here.

October 1, 2012 Ask Richard: Atheist Has to Listen to Roommate’s Christian Rock
Browse Our Archives
What Are Your Thoughts?leave a comment