At Western Kentucky University, a student wrote a letter-to-the-editor complaining about a flyer put up by the school’s Secular Student Alliance affiliate:

The Secular Student Alliance (SSA) has a new flier displayed around campus showing a man in a turban decapitating a cartoonist. The SSA has the freedom to display this cartoon, but their disregard for Muslim and Arab students in displaying it is morally reprehensible.

Many Muslims and Arabs here are visitors from abroad and have chosen to study here on American turf. Americans should welcome them as guests, not ridicule them for their beliefs.

Some may say that the cartoon is only ridiculing militant Islam, not Islam as a whole. This may be true. However, the image is emotionally loaded and can only exacerbate tensions between Muslims and non-Muslim Americans, not heal them.

This is the poster in question: 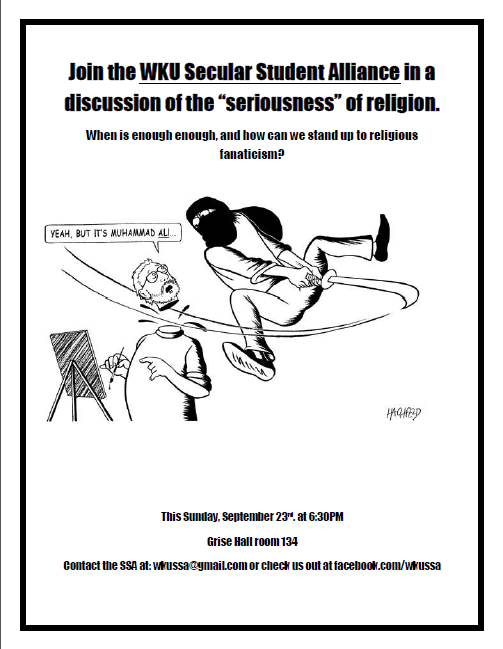 My initial reaction was that this poster suffered from the same mistake that Dave Silverman committed: It failed to distinguish, as the letter writer implied, between the radicals and the moderates.

While I’ve said before that moderates need to do a better job of standing up for freedom of speech — even if that speech criticizes or mocks their beliefs — their reluctance to do so isn’t even in the same ballpark as the extremists who kill because of it.

The SSA group at WKU tells me they received no criticism of their flyer until this letter appeared online. It seems like most people understood that it wasn’t directed at the moderates.

Do you think it’s offensive?

September 28, 2012
Michael Tracey Responds To Your Comments
Next Post

September 29, 2012 Kansas Church Will Have to Pay Taxes on State Senate Candidate's Home
Browse Our Archives
What Are Your Thoughts?leave a comment