He shouted his way through this video, regarding the American government’s reaction to The Innocence of Muslims.

He starts off shouting about “Piss Christ,” a photographic depiction of a small crucifix submerged in artist Andres Serrano‘s urine: 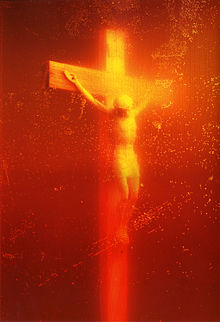 He continues shouting about how this is an award-winning piece of artwork that is celebrated and being brought back to display in Manhattan while The Innocence of Muslims was almost universally reviled:

Why are they choosing now? Why are they choosing the fall of 2012? I think it has something to do with the fact that they know they can get away with impunity by insulting Christians. For example, we know that there’s an anti-Islamic video out there — it’s caused Muslims to riot the streets.  People are dead in Pakistan and other parts of the world because people are taking to the streets upset about a video which, admittedly, is disrespectful to their religion.  And, you know, we find the people even in the White House, the political elites: President Obama, Secretary of State Hillary Clinton, they’re suffering apoplexy! They say this is awful, why should we insult anybody’s religion?  I would agree with them on that!

I’d only ask them: Where are they when Christians are being offended? We are offended over and over again, through the artistic community, on radio and television, in the movies. Where have these people been?  Why don’t they ever speak out against anti-Christian fare?

This is something that I have been turning over in my head since the whole Innocence of Muslims thing got out of control.

I thought: “Why should Obama apologize or condemn this stupid, crappy little film?  Freedom of speech, man!  America!  We have to protect all voices, even the unpopular ones! Especially the unpopular ones, like mine!”

Then, I watched a Daily Show interview with Salman Rushdie and he made a point that I hadn’t thought about: The people who are rioting don’t have an understanding of separation of society at large and the state. To them, an insulting video from one asshole American is an insult from our government.

Not to mention the whole region is a powder keg and everyone is treading lightly.  These are complicated times, and it’s hard to say what is the best way to deal with international crises.

Not to mention Donohue sounds like a shouting man-baby.  Shouldn’t he be saying, “Look at the Catholic community!  We face criticism every day and we respond with grace and by rising above” or something superior-sounding like that?  Instead he sounds like a bratty kid who only got one cookie when his sister got two.

So anyway, Donohue wrapped up his shout-a-thon by showing his new artwork: 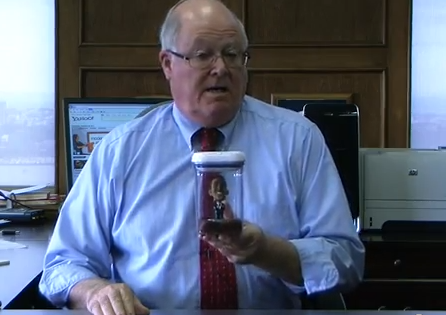 So.  Yeah.  I mean… I probably could come up with something snarky to say about it, but honestly what could I possibly type that would make Donohue seem dumber than just a picture of him holding a Tupperware container with brown Play-Doh and an Obama statue?

September 29, 2012
Kansas Church Will Have to Pay Taxes on State Senate Candidate's Home
Next Post