The Vision Montréal city council adjourned for Yom Kippur on Wednesday, as usual, despite the challenge of one councilwoman.

Anie Samson said that maybe there was a better way to handle religious holidays than to dismiss council meetings: 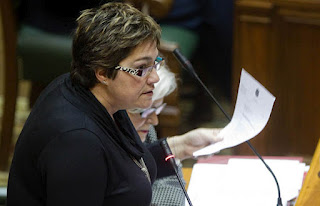 The city should not suspend its work for a holiday of one religious community but not others, she said, and added that three of city council’s 65 members are Jewish.

Rather than imposing a holiday on everyone, those who wish to celebrate their religions should be permitted to abstain from council without penalty, Samson said.

The French government recognizes a host of religious holidays and allows city employees to take those days off without being docked pay, she added.

I think it’s a great idea.  Not without flaws, of course.  It may be inconvenient for people to be absent at various points through out the year, but that’s life, right?  There is no way to adjourn meetings for every single religious holiday, to allow those who wish to observe to do so.

Or maybe Samson is a Jew-hater.  That sounds right, too.

No, seriously.  That was the reaction:

“It worries me when someone uses a sentiment towards the Jewish community to get media coverage,” opposition Projet Montréal councillor François Limoges said on Monday of the comments over the weekend…

“It’s playing on their sense of identity to denounce the fact that council will break for Yom Kippur,” Limoges said.

“It can feed anti-Semitism.”

Listen, I am all for cultural sensitivity for a historically victimized group, but this is over the top.  Samson was quoted saying that Limoges’ comments were “irresponsible,” and I agree.

I think that a reasonable argument against Samson’s proposal was from city councilor Joe Mihevc, who said that the current policy “fosters tolerance and understanding.” In a way, I understand what he means. It’s a “I want you to respect my religious beliefs, so I will respect yours” kind of thing.  I don’t necessarily agree that everyone staying home on every major religious holiday is the best way to foster respect, but it’s certainly an argument.

Calling Samson anti-Semitic is so far over the line, you can’t even see the line.  The line is a dot to you.

I’m going to leave Samson with the last word that I think we can all get behind:

[It’s] vile to associate wanting to apply the principle of secularism to a public institution with anti-Semitism.

(Via My Secret Atheist Blog)