Earlier this week, I covered the Auburn University-Montgomery Secular Student Alliance‘s vandalized flyers. Since then, there’s been some, ah… creative responses. 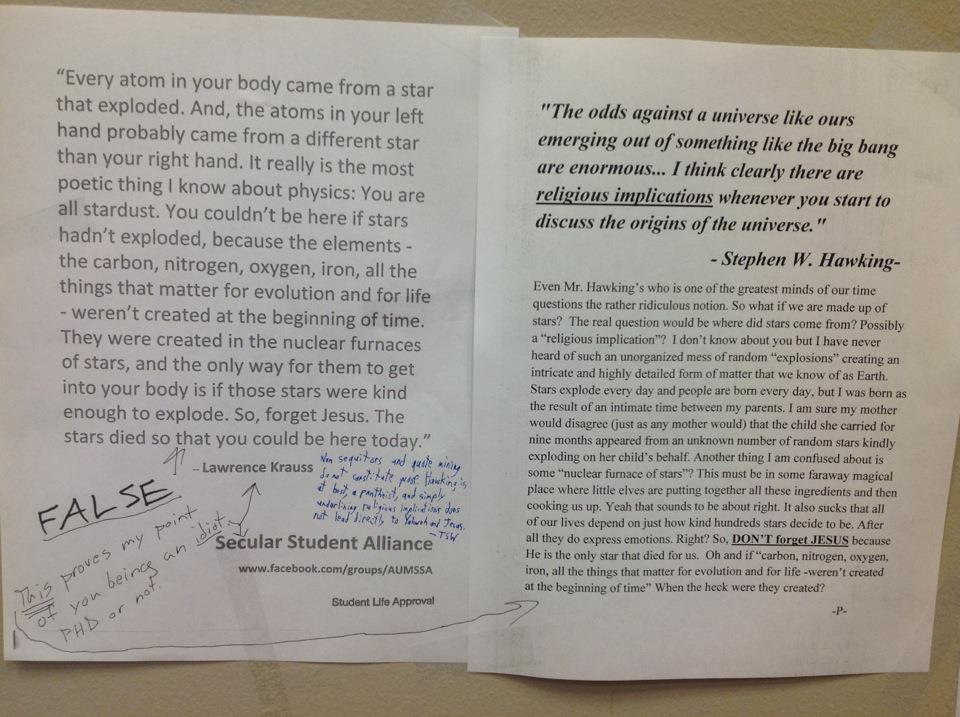 “The odds against a universe like ours emerging of something like the big bang are enormous… I think clearly there are religious implications whenever you start to discuss the origins of the universe.” — Stephen W. Hawking.

Even Mr. Hawking’s who is one of the greatest minds of our time questions the rather ridiculous notion. So what if we are made up on stars? The real question would be where did the stars come from? Possibly a “religious implication”? I don’t know about you but I have never heard of such an unorganized mess of random “explosions” creating an intricate and highly detailed form of matter that we know of as Earth. Stars explode every day and people are born every day, but I was born as a result of an intimate time between my parents. I am sure my mother would disagree (just as any mother would) that the child she carried for nine months appeared from an unknown number of random stars kindly exploding on her child’s behalf. Another thing I am confused about is some “nuclear furnace of stars”? This must be in some faraway magical place where little elves are putting together all these ingredients and then cooking us up. Yeah that sounds to be about right. It also sucks that all of our lives depend on just how kind hundreds of stars decide to be. After all they do express emotions. Right? So, DON’T forget JESUS because He is the only star that died for us. Oh and if “carbon, nitrogen, oxygen, iron, all the things that matter for evolution and for life – weren’t created at the beginning of time” When the heck were they created?

I’m going to assume this person has a vendetta against commas.

Also, they apparently missed this memo from Stephen Hawking back in 2010. (Don’t you love it when people take quotes out of context?)

Kudos to AUMSSA for not letting the vandalism keep them down and fighting back!

September 27, 2012
Announcing the Secular Coalitions for South Carolina and Pennsylvania!
Next Post