The Wrong Way To Speak Out Against Blasphemy Laws September 26, 2012 Hemant Mehta

The Wrong Way To Speak Out Against Blasphemy Laws

In addition to the other organizations speaking out against potential blasphemy laws in the wake of the radical Muslims rioting against a pathetic YouTube video, a couple more have issued statements of their own.

“AAI is deeply concerned that the UN member states will overreact to recent protests and violence in Muslim-majority countries — violence which itself is a grotesque overreaction to an amateur video of dubious origin — by endorsing anti-blasphemy resolutions during the General Assembly and within the UN Human Rights Council. Such steps would gravely undermine freedoms of expression and conscience, would give unwarranted privilege to religious viewpoints, and — most dangerously — would provide a veil of legitimacy for governments to oppress citizens in the name of protecting religion,” said President Carlos A. Diaz.

“Indeed, many of the countries that have been the vocal in their support for international regulation have been among the most egregious and regressive oppressors of both freethought and minority religions, often using domestic anti-blasphemy laws to persecute individuals with minority viewpoints. Inevitably, when people think for themselves there are going to be disagreements. The only fair response is to protect people’s right to express their views, not to favour one view over another,” said Diaz.

“We have seen recently that most of the Islamic world is demanding that all people avoid defaming their prophet, and suddenly across America our citizens are obeying out of fear or political correctness. We are losing our right to criticize, via our own submission,” said [President Dave] Silverman.

“Criticizing any religion is often equated to racism or hate, when really it’s just honest expression that must be protected,” said Mr. Silverman.

Silverman also posed for this image, which I think wrongly suggests that the whole religion is evil instead of just the way a minority of its radical followers practice and interpret it:

To say Islam is barbaric is to imply its followers are too. I’m all for the criticism of ideas, but this, to me, goes further than that. It’s too simplistic — for the sake of a Twitter hashtag, really — and it does a disservice to the millions and millions of followers of Islam who would fully support everything else on Dave’s sign. Yes, they’re wrong with their theology, but they’re not barbaric. Dave would no doubt agree with me on that, but his sign fails to make that distinction. 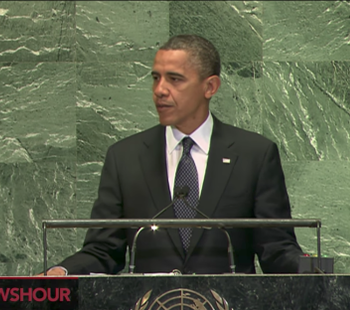 September 26, 2012
President Obama to United Nations: "We Do Not Ban Blasphemy"
Next Post